Voters must choose between Tory and hung parliament, PM says 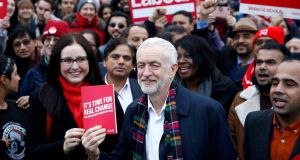 Boris Johnson has promised to bring his Brexit deal back to parliament before Christmas and take Britain out of the European Union by the end of January, ruling out any extension to the transition period beyond December 2020. But the Conservative manifesto pledges his government to legislate to ensure high standards of employment, environmental and consumer rights – key elements of the “level playing field” the EU insists must accompany any future trade deal.

Launching the manifesto in the West Midlands town of Telford, the prime minister said voters must choose between his government and a hung parliament with an alliance of Jeremy Corbyn and Nicola Sturgeon.

The manifesto promises more spending on health, education and policing but contains few new policy announcements. The document promises 50,000 more nurses for the National Health Service (NHS) but 19,000 of that number are existing nurses the government hopes to retain through a series of incentives.

On Northern Ireland, the manifesto says the Conservatives stand for “a proud, confident, inclusive and modern unionism that affords equal respect to all traditions and parts of the community”. It promises to devolve responsibility for corporation tax to Northern Ireland but only to “consider” the same for short-haul air passenger duty.

On legacy issues, it promises to provide better outcomes for victims and survivors and “to do more to give veterans the protections they deserve” but makes no specific commitments.

Mr Corbyn said Mr Johnson had launched “a manifesto for billionaires” that offered more of the same after almost a decade of cuts to public services.

“In contrast, Labour’s manifesto is full of popular policies that the political establishment has blocked for a generation. Labour will deliver the real change Britain needs, so that no one is held back and no community left behind,” he said.

Shadow chancellor John McDonnell said the women would receive a maximum payment of £31,300 with an average of £15,380, at a cost of £58 billion to the exchequer.

“They were paying in, they had a set date, the government changed that date, they are not properly informed and for many of them it is too late for them to plan properly for the changes this introduces into their lives. It is about income, of course it is. But often it is about many of them planning to retire, looking forward to looking after their grandchildren, taking them to school and picking up. Many of them have had to go back to work,” he told the Observer.

Japan to release 1 million tonnes of contaminated Fukushima water into sea 07:35
Daunte Wright shooting: Clashes with police for second night in Minneapolis 06:38
US police officer who killed Daunte Wright may have meant to use taser 01:00
One person dead and police officer wounded in Tennessee high school shooting 00:12
Fatal Minneapolis shooting appears to be ‘accidental discharge’ 22:13