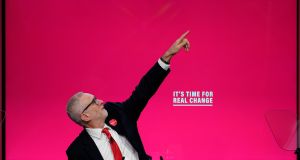 Labour leader Jeremy Corbyn: ‘Patriotism is about supporting each other, not attacking somebody else.’ Photograph: Christopher Furlong/Getty

The manifesto Jeremy Corbyn launched in Birmingham on Thursday was so heavily trailed in advance that most of the policy announcements were already expected. But the combined impact of such audacious tax changes and spending pledges was nonetheless dramatic.

On everything from education to housing and from taxation to social welfare, Labour would shift the burden from the young and the needy to the old and the well-heeled. Everyone would enjoy free broadband, prescriptions, dental checks, university tuition, adult learning and personal care.

Tens of billions of pounds would go into a huge programme of council house building and an expansion of other forms of affordable housing. The national minimum wage would go up to £10 (€11.70) an hour right away and all public sector workers would receive a 5 per cent pay rise.

That last commitment could be just what Labour needs to ensure that public sector workers, traditionally an important constituency for the party, comes out to vote on December 12th. And Corbyn hopes that the manifesto’s other promises will be sufficiently attractive to allow voters to overcome any difficulties they have with his own leadership or the party’s policy on Brexit.

Corbyn will also welcome any attacks on his taxation and spending plans from big business and the right-leaning press, which will help to keep the spotlight on Labour’s plans. Boris Johnson avoided any direct criticism of the manifesto’s policies, simply saying they were not credible because Corbyn was still on the fence over Brexit.

Labour’s Brexit policy is not, in fact, at all complicated but it suits the Conservatives and the Liberal Democrats to portray it as such. Corbyn is promising to negotiate a soft Brexit deal that would keep the UK in a customs union with the EU and in “close alignment” with single market regulations. This would be put to a referendum by next summer, with the other option on the ballot paper being to remain in the EU.

Answering journalists’ questions, Corbyn said the party had taken care to ensure that none of its manifesto commitments ran counter to EU rules on competition and state aid. Perhaps his best answer came when he was asked about claims that he was not patriotic.