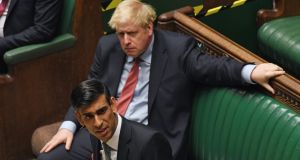 Britain’s prime minister Boris Johnson and chancellor of the exchequer Rishi Sunak: Employers who bring back someone furloughed and keeps them on the payroll until January will receive a £1,000 bonus. Photograph: Jessica Taylor

Britain’s chancellor of the exchequer has promised a further £30 billion to prevent the return of mass unemployment, offering direct support to employers, homebuyers and the hospitality sector. Rishi Sunak told MPs that the measures, which include subsidies for companies that bring furloughed employees back to work, could be followed by further action.

“I want every person in this House and in the country to know that I will never accept unemployment as an unavoidable outcome. We have not done everything we have so far just to step back now and say, ‘Job done.’ In truth, the job has only just begun,” he said.

During the first two months after the lockdown started, Britain’s economy contracted by 25 per cent, the same amount it grew in the previous 18 years. The government has already spent £160 billion in direct measures to ease the impact of the coronavirus crisis, including a furlough scheme that has paid 80 per cent of the wages of nine million workers, and £120 billion in deferred taxes.

The furlough scheme starts to taper off next month and will end in October but Mr Sunak said that employers who bring back someone who is furloughed and keeps them on the payroll until next January will receive a £1,000 bonus. A £2 billion “kick start” scheme will pay companies directly to create jobs for young people between 16 and 24 who are on benefits and at risk of long-term unemployment.

The hospitality sector, which has been hit harder than any other with 80 per cent of firms closing temporarily, will benefit from a cut in VAT from 20 per cent to 5 per cent. And in an eye-catching move, Mr Sunak announced that during the month of August, the government will pay 50 per cent of the bill for meals and non-alcoholic drinks in bars, cafes and restaurants up to a maximum of £10 per head.

“Each week in August, businesses can then claim the money back, with the funds in their bank account within five working days. Some 1.8 million people work in this industry. They need our support, and with this measure, we can all eat out to help out,” he said.

The measures supporting the hospitality industry were welcomed in Northern Ireland, where the sector has long complained that it was made uncompetitive by the lower VAT rate across the Border. Northern Ireland will also benefit from the change to stamp duty that will exempt the first £500,000 of all property sales from the tax.

Labour’s shadow chancellor Anneliese Dodds welcomed some of Mr Sunak’s announcements but said they were inadequate and called for a more sectoral approach to supporting businesses.

“Supporting businesses that are viable in the long run but currently starved of cash flow is not a matter of ‘picking winners’: it is about protecting our country’s economic capacity for the future. Failure to do so – to make the job retention and self-employed schemes more targeted and focused and to support viable businesses – is driving up unemployment in this country.

“The claimant count is on course to top three million people in June – the highest number since the previous record in 1986. This is the chancellor’s record, and one that cannot and must not be worsened,” she said.