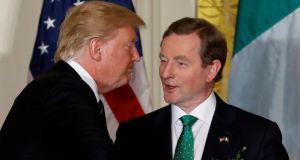 US president Donald Trump with Taoiseach Enda Kenny after Trump’s remarks to a St Patrick’s Day reception at the White House in Washington, DC, on Thursday. Photograph: Jonathan Ernst/Reuters

The queue snaked around the corner of 15th Street at the southeast entrance to the White House.

In the bright, glistening air of the bitterly cold March day, invitees to the annual St Patrick’s Day reception patiently waited in line to pass through the various sets of US secret-service personnel at the gates.

One man, a St Patrick’s Day regular at the president’s residence, told me he had been attending the event for 20 years. “This is still one of the hottest tickets in town,” he whispered surreptitiously. He had worked for both president Bushes. What did he think of the new Republican president?

Those in the queue were mostly men, proudly sporting green ties and expensive suits. One wore a green baseball hat with the words “Make America Great Again” emblazoned on the front.

Thursday’s St Patrick’s Day reception at the White House was the first major social event held by Trump since he arrived in Washington in January. The 500 attendees were keen to see how the president would handle the event.

Bagpipes greeted guests as they entered through the main entrance and smiling butlers served people with drinks. An elegant buffet of spring lamb chops, smoked salmon and potato cakes was set out on tables.

Guests wandered in and out of rooms, taking pictures alongside the portraits of past presidents and first ladies. A serene-looking Abraham Lincoln peered down over guests as they chatted and posed for selfies, waiting for the White House’s latest resident to arrive. One woman from Northern Ireland, a member of one of the many civic groups invited to the White House, borrowed a hairbrush as she waited in the powder room next to the ladies’ bathroom. “I can’t wait to see him in the flesh. Pity Melania isn’t here,” she said.

Shortly after 6pm, Donald Trump and his “new friend” Enda Kenny took to the stage for their third appearance together that day. The US president again spoke of the strong ties between the United States and that “truly great country”, Ireland. The Taoiseach once again stressed the “deep and historic ties” between the two countries, recalling how Irish foreign military officers had helped George Washington to win the war of independence and have fought “in every war for America since then”.

The Taoiseach told the assembled guests that the White House was built by James Hoban, a Kilkenny-born architect, and modelled in part on Leinster House. But as Michelle Obama famously said, the White House – a proud new symbol of the American nation when it was completed in the flurry of energy and enthusiasm in the years following independence – was also a house built by slaves.

Hoban himself owned three black slaves, named in the White House records as Ben, Daniel and Peter – a telling example of the complex undercurrents of race, immigration and oppression that underpinned the development of America and continue to this day.

Immigration and tolerance were the real themes of this St Patrick’s Day. US media looked for any mention by the Taoiseach of immigration during his meetings with a man who has raged against diversity and inclusiveness.

The irony of the US president’s effusive praise of the “terrific contribution” made by Irish immigrants to American society, on a day when his proposed travel ban was scheduled to come into force, was stunning in its hypocrisy.

But no one seemed to care. For the crowd that assembled in the east room of the White House to see the president, there were no questions asked. That’s just Trump. What can you do?

As the speeches drew to a close and the requisite bowl of shamrock was presented, the guests pushed forward to try to get a closer look at the new US president. Rumours had rippled through the crowd that the president was planning to “mingle”. The lobbyists primed themselves for the coveted opportunity for face time with the president; business cards were produced.

But it wasn’t to be. Instead the Taoiseach and Mr Trump shook hands and smiled at guests from behind the cordon as they exited the room, Trump presumably moving upstairs to his private quarters and the Taoiseach to yet another reception.

The green furnishings were packed away for another year, the soda-bread recipes filed away and the daily rhythm of the most famous house in the world resumed.

As Kenny leaves the conundrum of hosting Trump to his successor, and the US president returns to tweeting and governing, for those people living in an America where they feel increasingly marginalised, the reality of a Trump presidency continues.