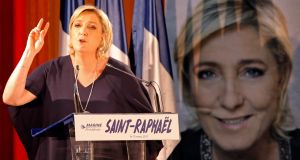 Since she took over the extreme right-wing Front National (FN) in 2011, the presidential candidate Marine Le Pen has gone to extraordinary lengths to legitimise the party, even expelling her father Jean-Marie for his disparaging remarks about the Holocaust.

But the suspension of an FN regional councillor in Nice for similar remarks this week, two television documentaries and a newly published book seem to indicate that Holocaust negationism and anti-Semitism remain entrenched beneath the acceptable surface of the FN.

Benoît Loeuillet was elected a regional councillor for the FN last December. The 45 year-old owner of a bookshop in Nice had come from the identitaire movement on the margins of the FN.

Journalist Quentin Pichon from the C8 television channel went to Loeuillet’s bookshop with a hidden camera. In the back room, Loueillet showed Pichon books by Adolf Hitler and the revisionist historian Robert Faurisson.

Loueillet said he wasn’t sure what to think of Faurisson’s theories. Then he added: “Well, after all, I think there weren’t so many dead. There weren’t six million. There weren’t mass deaths as has been said.”

The FN suspended Loueillet immediately, saying “such ideas have no place in the Front National”.

Louis Alliot, Le Pen’s companion and a vice-president of the FN, tweeted: “The chameleons who hide in our ranks and take advantage of the success of the FN while harbouring hateful ideas must leave.”

Yet a documentary broadcast by France 2 television on March 16th, and the book Marine Knows All About It . . . published this week by investigative journalists Mathias Destal and Marine Turchi, were far more damaging.

They outlined the shady business practices and neo-Nazi sympathies of close associates of Le Pen. Frédéric Chatillon, Axel Loustau and Nicolas Crochet are the architects of the FN’s finances. And they are at the heart of four of five criminal investigations into illegal party funding. The men have been Le Pen’s friends since she studied law at the Assas faculty in Paris in the early 1990s.

Crochet, a certified accountant, drew up 18 of 23 allegedly fake job contracts at the EU parliament for FN party workers. Chatillon and Lousteau ran Riwal, the events company accused of extorting money from former FN candidates and from the state.

The intricate financial schemes detailed in the book and documentary are a long way from the law faculty, which was a hotbed of extreme right-wing militancy. Members of the Groupe Union Défense or GUD kept iron bars and wooden sticks in their office to attack “reds”. Chatillon was active in the “black rats”, the GUD militia, and became the head of GUD in 1992.

Denis Le Moal, a former GUD member, told Destal and Turchi how Chatillon started a brawl on the night of his bachelor party by ordering the barman: “You, negro, serve me a drink.”

The book includes a French intelligence report dated June 8th, 1993, which records that Chatillon made the Hitler salute while the Marseillaise was sung at a commemoration of the Algerian war, stuck up posters calling the desecration of a Jewish cemetery a “frame-up”, opened the GUD to skinheads, and twice visited Leon Degrelle, an ageing Belgian leader of the Nazi Waffen-SS who lived in exile in Madrid.

Chatillon sued a journalist who called him a neo-Nazi. Le Moal testified that Chatillon organised a dinner every April 20th to celebrate Hitler’s birthday. He presented a painted portrait of Hitler with the words, “My beloved Fuhrer, he is magnificent”, then kissed the portrait.

An anonymous witness interviewed by France 2 said Chatillon and his buddies referred to Hitler as “uncle” and made jokes about a football pitch and swimming pool at Auschwitz. “It was along the lines of ‘We didn’t kill enough of them,’” the witness said.

Within the last decade, Chatillon and Loustau exchanged messages marking the “sad” anniversary of Hitler’s death. Lousteau was photographed giving a Nazi salute at his birthday party in 2011.

Lousteau is the treasurer of Le Pen’s “micro-party” Jeanne, an FN councillor for the Paris region and a candidate in the June legislative elections.

Eager as Le Pen is for respectability, she refuses to denounce her friends. “Frédéric Chatillon is not a Nazi. I have no Nazis around me,” she told BFMTV in 2014. Her former cabinet director, Philippe Martel, said Le Pen told him she could trust her old friends from the GUD with her life.

Aymeric Chauprade, a former top adviser to Le Pen, left the party in November 2015. He says he objected to Crochet’s diversion of EU funds to the FN; the FN says Chauprade was expelled for Islamophobia.

Le Pen “minimises or overlooks how dangerous these people are”, Chauprade told France 2. “She is in the hands of a group who are ideologically dangerous, and whose illegal, illicit practices will get her in trouble.”