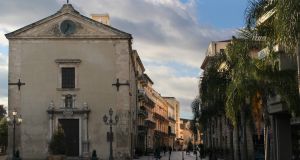 Bishop Pennisi concedes that the Italian Catholic Church has been, and continues to be, ‘soft’ on the Mafia. Photograph: Getty Images

An Italian bishop has stepped up the Catholic Church’s repudiation of organised crime by issuing a diocesan decree banning known mafiosi from acting either as godparents for baptism or sponsors for confirmation.

The decree by Michele Pennisi, Bishop of Monreale, near Palermo in Sicily, follows on the teaching of Pope Francis who in an unprecedented speech in Calabria in June 2014 “excommunicated” the Calabrian Mafia, the “’nDrangheta”, currently Italy’s most powerful organised crime unit, saying: “The ‘nDrangheta represents the adoration of evil and total contempt for the common good...Those who in their lives have chosen this path of evil are not in communion with God, they are excommunicated...”

Bishop Pennisi’s ruling this week appears to follow on from the polemics generated last year when Giuseppe Riina, son of the “boss of bosses” ‘Toto’ Riina, was allowed to act as a godfather at the baptism of his nephew, son of his sister Lucia.

For the occasion, Guiseppe Riina, who is currently confined to Padova in northern Italy on a sort of house arrest, was allowed to return to his native Corleone, the historic power centre of his father’s criminal activity.

Toto Riina has been in prison since 1993, currently serving concurrent life sentences for murder and a variety of other Mafia crimes.

In his decree, Bishop Pennisi was keen to underline that there is a “total incompatibility” between a mafioso godfather and a Christian godfather, telling the Italian newspaper Corriere Della Sera: “Last December, Riina’s son served as a godfather to his nephew...But the Christian godfather must guarantee the child’s education and upbringing in the faith and how can he do that if his life is in contradiction of the gospel, if it is violent and totally ruled by the god money. There is a total incompatibility here and we’ve got to be clear about that...”

In essence, Bishop Pennisi wants to underline a very obvious reality about Italy’s various Mafia organisations. Namely that, although they like to use the term “godfather”, there is nothing remotely paternalistic or caring about the manner in which they run their business:

“We cannot ignore the fact that standing as a godfather at a baptism...serves to win consensus and a sort of religious honourability to which the Mafia godfather is not entitled...”

Bishop Pennisi concedes that the Italian Catholic Church has been, and continues to be, “soft” on the Mafia so as not to “upset social balances”. He argues that the Mafia benefits from “a basic ambiguity”, saying: “People think that the Mafia is less dangerous because it does not (always) show its vicious side but they do not take into account that it continues to have a big influence, perhaps a more subtle one, on the (collective) mentality...”

In 2008, Bishop Pennisi received threats on his life for refusing to bury a local Mafia godfather in Gela, Sicily. Despite that experience, he still believes that mafiosi can repent and “convert”, provided that the “conversion means changing your life, atoning for your wrongdoing and offering a public apology to the families of the victims (of Mafia crime)”.

Guiseppe Riina is not new to controversy. Last year, the publication of his book, Riina Family Life prompted outrage because it attempted to portray his family as “normal”, making no reference to the many killings and bombings ordered by his father.