Ziyed Ben Belgacem on the authorities’ radar as a radicalised Muslim 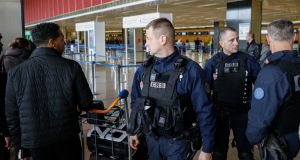 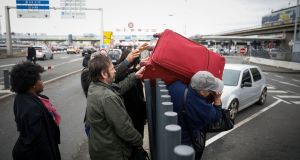 Travellers hand their luggage to friends over a fence as they walk back into Orly airport, south of Paris, when flights began to resume on Saturday. Photograph: Kamil Zihnioglu/AP

A postmortem was being carried out on Sunday to determine whether a suspected Islamic extremist was drunk or high on drugs when he took a soldier hostage at Orly Airport in Paris and was shot dead by her fellow patrolmen.

The suspect, Ziyed Ben Belgacem, stopped at a bar in the early hours of Saturday morning, about four hours before he first fired bird shot at traffic police. Then, 90 minutes later, he attacked the military patrol at Orly, causing panic and the shutdown of the French capital’s second-biggest airport.

In an interview on Sunday with French radio Europe 1, a man identified as the suspect’s father said Belgacem was not a practising Muslim and drank alcohol. “My son was never a terrorist. He never attended prayer. He drank. But under the effects of alcohol and cannabis, this is where one ends up,” said the father. Europe 1 did not give his name.

The Paris prosecutor’s office, which is in charge of the investigation, said on Sunday that Belgacem’s father was released from police custody overnight. His brother and a cousin were still being questioned.

In a news conference late on Saturday, Mr Molins said Belgacem called his father and brother early that morning, minutes after he fired bird shot at a police traffic patrol, injuring an officer in the face, to say that he had made a stupid mistake.

“He called me at seven, eight in the morning and said, ‘there you go, Papa’, he was extremely angry, even his mother couldn’t understand him,” the man identified as the father said on Europe 1. “He told me, ‘I ask for your forgiveness. I’ve screwed up with a gendarme’.”

Blood samples taken during Sunday’s postmortem were to be screened for drugs and alcohol, the prosecutor’s office said. The 39-year-old Frenchman had a long criminal record, with multiple jail terms for drugs and robbery offences.

Mr Molins said Belgacem was out on bail, banned from leaving France and obliged to report regularly to police, having been handed preliminary charges for robberies in 2016. He was also flagged as having been radicalised during a spell in detention from 2011 to 2012, Mr Molins said.

His house was among scores searched in November 2015 in the immediate aftermath of suicide bomb-and-gun attacks that killed 130 people in Paris. Yelling that he wanted to kill and die for Allah, Belgacem wrested away the soldier’s assault rifle during the Saturday morning airport attack, but was shot and killed by her two colleagues before he could fire the military-grade weapon in Orly’s busy south terminal.

“With a pistol in his right hand and a bag over his shoulder, he grabbed [the soldier] with his left arm, made her move backward by three to four metres, positioning her as a shield, and pointed his revolver at her forehead,” Mr Molins said.

According to soldiers, the attacker yelled: “Put down your weapons. Put your hands on your head. I am here to die for Allah. Whatever happens, there will be deaths,” Mr Molins added.

The attack forced both of the airport’s terminals to shut down and evacuate, sent passengers and workers fleeing in panic and trapped hundreds of others aboard flights that had just landed. It was the violent climax of what authorities described as a 90-minute spree of destructive criminality across Paris by the suspect.

The drama, which caused no injuries apart from the lightly-wounded traffic police officer, further rattled France, which remains under a state of emergency after attacks in the past two years that have killed 235 people.

Presidential candidates responded swiftly to the incident. Conservative François Fillon said that France was in a “situation of virtual civil war” and spoke out against a proposal to lift a state of emergency in place since the November 2015 attacks.

Far-right candidate Marine Le Pen, running on an anti-immigration, anti-EU ticket, said the Orly attacker could have caused a “massacre”. “Our government is overwhelmed, stunned, paralysed like a rabbit in the headlights,” she told an election rally.