Passengers arriving in Ireland will be obliged to fill out locator forms or face €3,500 fine 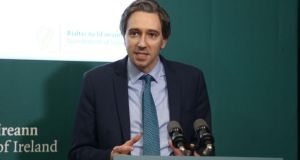 Simon Harris said on Thursday that ‘the passenger locator form should be on a legal footing’.

The Cabinet has signed off on plans to make it mandatory for travellers coming into Ireland to tell the State where they will be isolating for 14 days.

Minister for Health Simon Harris said on Friday that living alongside the virus requires us “to do things differently.”

From next week passengers arriving into a Ireland from abroad will be obliged to fill out a passenger locator form. Mr Harris said the measure will help ensure swift contact tracing if the person contracts Covid 19.

Mr Harris said on Thursday that “at the moment the passenger locator form is on an administrative basis. A person is asked to fill it out. I believe it should be on a legal footing”.

He said that conversations are ongoing with ministerial counterparts in Northern Ireland and the UK about the potential measures.

“Certainly, on a north, south, east and west basis this is a matter I have discussed with my counterpart in Northern Ireland and I know the Taoiseach has spoken publicly about his discussions with the British prime minister.

He said the Irish position is that “we expect people, whether Irish or not, to self-isolate for 14 days.

“This applies to anybody coming to the country, including returning Irish people. We also expect people to fill out a passenger locator form, indicating a name, phone number and where the person intends to stay for those 14 days.”

The new regulations will come into effect from Thursday, May 28th and will remain in effect until June 18th, when they will be reviewed.

Those who do not fill out the passenger locator form or who provide false details could face a fine of €2,500 or a prison term of six months.

Mr Harris said: “These are extraordinary measures but they are necessary in a time of a public health crisis.

“We continue to advise everyone against non-essential travel. However, if a person does arrive into Ireland, they will legally obliged to fill out this form, regardless of their nationality.

“The form will be used to facilitate a system of follow up checks to make sure people who travel to the country are staying where they said that they would. The form will also ensure more accurate and quicker contact tracing, should we have a confirmed case on a flight or ferry coming into Ireland.

“Every measure we take is aimed at stopping the spread of Covid-19 and protecting people from this virus. This is no different.”

Travellers from Northern Ireland will only have to fill out a portion of the form.

No personnel have rejoined Defence Forces under scheme, Dáil told 15:05
Trinity College Dublin to resume with as much face-to-face teaching as possible 14:42
Covid-19: Harris urges people not to think it’s ‘mission accomplished’ ahead of next phase 13:36
Dáil observes minute’s silence after death of George Floyd in the US 13:34
End ‘shameful stand-off’ over pension for Troubles’ victims, Johnson told 12:39