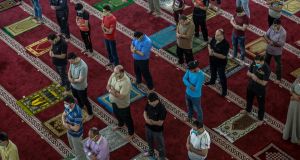 Faithful in protective masks attend Friday prayers during Ramadan at a mosque in Gaza City on Friday. Photograph: Mohammed Saber/EPA

Rarely, if ever, in the 1,400-year history of the faith have Islam’s three holiest mosques in Mecca, Medina, and Jerusalem closed simultaneously during the fasting month of Ramadan and Eid al-Fitr, the feast celebrating its conclusion, which begins Saturday night.

The coronavirus pandemic has caused the suspension of communal services. Prayers are performed by imams in empty mosques and broadcast live on internet platforms with the aim of reaching many of the world’s 1.8 billion Muslims.

At the outset of Ramadan, Saudi Arabia’s King Salman announced the unprecedented disruption in Mecca and Medina, where the Prophet Muhammad began his mission, “to protect the peoples’ lives and health in combating the coronavirus pandemic”.

These measures have delivered a major blow to Muslims seeking to carry out one or other of these spiritual journeys, which they are enjoined to make once in a lifetime. Cancellations constitute a serious sacrifice for the House of Saud as its legitimacy as guardian of the Muslim holy sites depends on providing Muslims with access to Mecca and Medina.

The Saudis point out that the Hajj has not been called off since 1932 when King Salman’s father, Abdul Aziz ibn Saud, captured Mecca and Medina from the Hashemites, who had ruled the holy cities from the 10th century.

Jerusalem’s al-Aqsa and the splendid Dome of the Rock are revered as the location of the Prophet’s mystical night visit to Jerusalem and ascent to heaven. This is the first time al-Aqsa has been closed for public prayers during Ramadan since 1099 following the crusader conquest of Jerusalem.

The Christian crusaders massacred Muslims who sought sanctuary in al-Aqsa, which became the headquarters for the Knights Templar. In October 1187, Salahedin (Saladin) expelled the crusaders and restored Muslim control over al-Aqsa and the Dome of the Rock.

Since 1948, they have been administered by Jordan’s Islamic trust, which expects to reopen them after the Eid al-Fitr holiday.

Observing social distancing, Palestinians have prayed in streets near al-Aqsa. The virus has prevented tens of thousands of West Bank Palestinians – most of whom are barred from entering Jerusalem except on Fridays in Ramadan – from attending noon prayers at al-Aqsa.

Last year Israel granted 320,000 permits allowing West Bank residents to travel by bus to spend the day in the Old City, praying, visiting family, shopping, and reconnecting with the centre of their religious life.

Those living in the West Bank have endured double lockdown – by the Palestinian Authority and by Israel. The traditional call to prayer has been altered. Instead of “Come to pray”, muezzins have cried from minarets, “Pray in your homes”.

Both Saudis and Palestinians have suffered major financial losses from the barring of foreign and local pilgrims from the mosques.

Saudi Arabia has reported more than 67,000 Covid-19 cases and 364 deaths while Palestine has confirmed 423 cases and two deaths.