Nigel Farage's Brexit Party made huge gains in the European election, riding a wave of anger at the failure of Prime Minister Theresa May to take the United Kingdom out of the European Union. Video: Reuters 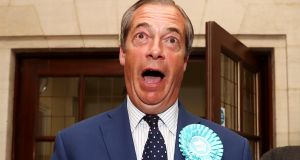 Brexit Party leader Nigel Farage speaks to the media outside the count centre for the European Parliament election in Southampton on Sunday night. Photogrph: Hannah McKay/Reuters

Nigel Farage’s newly formed Brexit Party is on course for victory in the European Parliament elections in the UK, sidelining the Conservatives and Labour in an indication that Brexit uncertainty is taking its toll on both main UK parties.

Early results indicated that the Brexit Party would come out on top nationally, with the pro-European Liberal Democrats following in second place, while the Conservative Party was on course to finish fifth behind Labour and the Greens.

The Brexit Party scored a resounding success in north-east England, winning two of the three MEP seats in the region.

The party has seen three MEPs elected in the east of England, while the Lib Dems secured two seats and the Greens and Conservatives each scored one seat.

The Lib Dems won the biggest share of the vote in London, electing three MEPs, while Labour and the Brexit Party each garnered two seats.

Arriving at Southampton Guildhall for the south-east regional count, Mr Farage said: “It looks like we have a big win for the Brexit party, which I’m pleased about.”

Early indications suggested that the Conservatives have taken a hammering as voters turned to Mr Farage’s new party to protest at Theresa May’s failure to secure the UK’s withdrawal from the EU.

The UK was due to leave the EU on March 29th – instead it remains a member of the bloc – while the scheduled date of Brexit has been delayed to October 31st. The British prime minister’s inability to see her deal through culminated in the announcement of her resignation on Friday.

Nick Boles, a former Tory MP who resigned from the party after his attempts to reach a Brexit compromise failed, fired a warning shot to his former colleagues.

“Tonight’s results will turn the Tory party into the party of no-deal Brexit. Leadership candidates will be forced to confirm that they will take the country out of the EU on 31 Oct, come what may. Tory MPs who can’t stomach it will need to find a new home,” he wrote on Twitter.

Labour has also taken a hit after warnings that its prevarication over a second referendum would cost votes on both sides of the debate.

In Wales, Labour came in third place as the Brexit Party won the poll and elected two MEPs.

In a similarly successful night for Mr Farage’s party in the West Midlands, the Brexit Party secured three MEP seats.

Meanwhile, in Yorkshire and Humber, the Brexit Party again came out on top, while the Tories trailed behind in fifth place.

Emily Thornberry, the shadow foreign secretary, suggested on Sunday night that the party leader, Jeremy Corbyn, might face pressure from pro-Europeans in his parliamentary party to shift his policy.

Mr Corbyn has so far resisted attempts by Europhile MPs and members to give a cast-iron pledge on a second referendum in all circumstances.

Instead, Labour has stuck to a more complex policy whereby it would back what it calls a confirmatory referendum only on a “damaging Tory Brexit” or on a no-deal Brexit.

“The point is we went into an election where the most important issue was our view on leaving the EU,” Ms Thornberry told the BBC. “And we were not clear on the one thing people wanted to hear. We should have said that any Brexit deal should be put to a confirmatory referendum. And that Labour would have campaigned to remain.”

In a further warning shot to Mr Corbyn, Labour’s deputy leader Tom Watson launched a survey of party members seeking their views on a second referendum.

“Following the disastrous EU election results, Labour urgently needs to re-think its Brexit position and realign with members and voters”, Mr Watson said on Twitter. “For Britain’s sake, we must find our voice and fast. I want to hear from members and supporters.” – Copyright The Financial Times Limited 2019