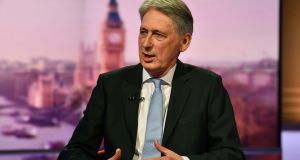 UK chancellor of the exchequer Philip Hammond on The Andrew Marr Show: refused to rule out voting against his own government in the event of a no-deal exit. Photograph: Jeff Overs/BBC/Handout

Britain’s chancellor of the exchequer, Philip Hammond, has warned Conservative leadership candidates they will not survive long in office if they try to push a no-deal Brexit through parliament. Mr Hammond’s warning came as environment secretary Michael Gove became the latest cabinet minister to enter the race to succeed Theresa May, promising to unite the Conservative Party and deliver Brexit.

Three candidates, former foreign secretary Boris Johnson, former Brexit secretary Dominic Raab and former work and pensions secretary Esther McVey, have said they will take Britain out of the European Union on October 31st with or without a deal.

But Mr Hammond warned that any prime minister who pursued a no-deal Brexit would face a confidence motion and he refused to rule out voting against his own government in those circumstances.

“I think it would be very difficult for a prime minister who adopted no-deal as a policy – we are leaving with no deal as a matter of policy – to retain the confidence of the House of Commons,” Mr Hammond told the BBC’s Andrew Marr Show.

“I’m saying this is a very difficult situation. It would challenge not just me, but many of our colleagues, and I hope we will never get to that position.”

Mr Raab, who served as Brexit secretary for four months last year, said Mrs May had not been sufficiently resolute in dealing with Brussels and claimed that he had been undermined during the negotiations. He said he could get a better deal from Brussels if the EU knew the British prime minister was prepared to go through with a no-deal Brexit.

“I would fight for a fairer deal in Brussels with negotiations to change the backstop arrangements, and if not I would be clear that we would leave on WTO [World Trade Organisation] terms in October,” he said.

Nominations close on June 10th and MPs will then start whittling down the field in a series of eliminatory ballots until two candidates are chosen to go before the entire party membership. Mr Johnson is the favourite in polls of party members and his rivals have been quick to target him, directly or indirectly.

Mr Stewart said he could not serve in government under Mr Johnson, claiming that the former foreign secretary had gone back on an assurance he gave in a private meeting that he would not pursue a no-deal Brexit.

“Boris is an incredibly charming person, but it is sometimes quite difficult to be certain what’s going on. I called him out and said I was against him because he seemed to be advocating for something that I thought would damage us. And he called me and said ‘no, no, no I’m not doing that’, and it seems I think he is doing that,” he said.

“There isn’t a majority in parliament for a no-deal Brexit. And what parliament would do in that situation is request an extension from the EU. But it doesn’t need to come to that, we can get Brexit done a long time before that if we can begin to explain to the public, to the Tory party members, that no-deal isn’t going to happen, that no-deal is a route to a general election.”

1 WHO warns of potential for ‘immediate second peak’ in Covid-19
2 Archaeologists are ‘quite sure’ they have found Red Hugh O’Donnell’s burial place
3 Coronavirus: What will reopen in Ireland’s phases to ease restrictions and what are the dates?
4 Coronavirus: No new Covid-19 deaths reported in State for first time since March
5 Maureen Dowd: Trump has been wearing a mask for years
Real news has value SUBSCRIBE