‘Sweden and Ireland have many things to discuss’ 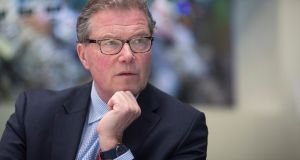 Leif Johansson: “Sweden and Ireland have many common things to discuss. We are relatively small countries, both of us. We are dependent on the rest of the world to do well.” Photograph: Simon Dawson/Bloomberg

When prominent Swedish businessman Leif Johansson first travelled the world, the Iron Curtain was up and “no one would have believed” it would come down.

“I went to countries like China and South Korea early in my career. No one thought they would be open to the type of trade we have now. But we may have made the mistake of thinking that everything was heading the one way. Now we have clear disruptions, we need to rewin the argument that free trade in many, many countries is actually a good thing.”

Johansson (67) points out that he was born in the early 1950s and, as such, he has lived through the full post-war shift to free trade.

“You can probably make the argument that free trade has done better for some countries than for others, but I think it’s very difficult to say that were we without free trade, most countries would be better off.”

The chairman of Anglo-Swedish pharmaceutical company AstraZeneca was in Dublin last week as part of the Swedish royal family delegation, his focus being to discuss opportunities for artificial intelligence (AI) in healthcare and other possible co-operation between Irish and Swedish industry. AstraZeneca employs about 60 people in Dublin.

“Sweden and Ireland have many common things to discuss. We are relatively small countries, both of us. We are dependent on the rest of the world to do well.”

The former chief executive of Volvo and appliance-maker Electrolux, who has also served as chairman of telco Ericsson, agrees it has been easy to “take for granted, in my generation of leadership especially” the multilateralism – positive from his small-country perspective – that rose up with the World Trade Organisation.

But the belief that the world would “forever be more available” has been knocked of late. Alongside US-China trade tensions, isolationism-reviving Brexit is the big topic clouding the backdrop for European businesses in 2019.

Johansson expects a hard Brexit will ultimately be avoided – “I find it difficult to think that the UK political leadership would want to sail out into the ocean” – but the problem with these years of uncertainty is that it demands companies plan for the worst-case scenario.

AstraZeneca, like other pharma groups, has been stockpiling medicines and taking other precautions to minimise the potential disruption of a hard Brexit.

“What we have to concentrate on doing is making sure there is as little negative impact for patients as is ever possible.”

AstraZeneca froze its UK manufacturing investments in 2017 and will continue to do so until there is clarity about its future trading relationships. This is the more hidden damage of Brexit – the investments companies might have made, but haven’t.

“Fortunately, so far” there hasn’t been any specific major decision by AstraZeneca to invest somewhere else instead. But most of its drug plants are built for export, not local supply. “It’s obvious” that if it doesn’t know if it can export from one or not, it won’t be the subject of investment.

Is there mystification in Sweden about the path the UK has taken?

“I think mystification is probably a good word,” Johansson says. But both in Sweden and in the business world – he is a member and former chair of the European Round Table of Industrialists (ERT) – Brexit has ignited fiercer convictions than ever in the merits of the European project.

“The support in general across Europe for the European Union has actually increased,” he says. Among the ERT group, which brings together 55 chief executives and chairs of major multinational companies, there is “renewed interest” in EU investment.

“Ten or 15 years ago, we were absolutely concentrated on getting into the US, or getting into China. Now we are saying let’s start looking at Europe, so that’s good news.”

Although it would be better for the Paris climate accord “to really work”, Europe is also “quite well set up” to develop the technologies required to lessen fossil fuel consumption, says Johansson, a qualified engineer who describes himself as “an activist technology optimist”.

AI, he terms “a very exciting opportunity”, and one that he expects will continue to attract large investments by pharma companies and healthcare providers.

“We are beginning to see the first medicines coming out of data only, and not out of clinical trials,” he notes, though on medical data there’s “a big debate on privacy” to balance with the mission to offer – and public wish to receive – “the best healthcare in the emergency room”.

AI is now also at the heart of the vehicle industry, much changed since he drove away from it in 2011. In Sweden, “most people remember me as the man who sold the Volvo car business” (to Ford in 1999), which was a big headline at the time, though under his reign Volvo then used the proceeds to build up its successful truck and bus manufacturing operation.

Today, when the Gothenburg-headquartered Volvo Group’s vehicles make headlines it often involves the words “autonomous” or “self-driving”. Thanks to “advanced thinking in city planning”, it is at the commercial rather than private car end of the industry where the results of AI investment will be evident sooner, Johansson believes.

“People like their cars. I do too, I listen to good Spotify music and everything else, but there is also a desire by most people to reach the place they are going in a predefined time.”

Indeed, it sounds very much like advanced city planning in Gothenburg, where he lives, may be somewhat more “advanced” than it is in Dublin.

Does he miss Volvo?

“Absolutely. Between Electrolux and Volvo, I was the CEO of large Swedish public companies for more than 20 years. When you are a CEO, there is a pace of things happening, and there’s a feeling you can impact a lot. I miss that every day,” he says.

But if he was still there, he would probably be feeling like he was trapped in “a squirrel wheel” – this is the Swedish version of the hamster wheel.

“So I enjoy very much what I am doing now,” he says. And he still drives a Volvo.