Ecologist party EELV makes a breakthrough, coming in third ahead of the Socialists and far-left France Unbowed 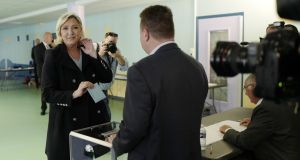 Marine Le Pen’s populist nationalist Rassemblement National won the EU parliamentary elections in France with 23.3 per cent of the vote, according to exit polls published by Ipsos/Sopra Steria on Sunday night.

President Emmanuel Macron’s La République En Marche (LREM) came in second, with an estimated 22.1 per cent. Though expected, the results were a severe blow to Mr Macron’s ambition of seizing the leadership of Europe and modernising the French economy.

“The French placed the list of the Rassemblement National in the lead,” Ms Le Pen said to cheers by RN faithful. “I see it as the victory of the people who have this evening retaken power, with pride and dignity.”

Ms Le Pen said Mr Macron “must assume the consequences since he put his personal credit in the balance by making this a referendum on his policies and his person. He has no choice but to dissolve the National Assembly and chose a more democratic electoral system that would be more representative of opinion”.

No one seriously expects Mr Macron to dissolve the assembly, but he is likely to undertake a major cabinet reshuffle. He will also adopt what prime minister Edouard Philippe called “a new method to help the territories that feel forgotten, to involve the French, their elected officials, the social partners more, without losing our ambition and our audacity. That is what is at stake in act two [of the Macron presidency]

It will be difficult for Mr Macron to move ahead with planned reforms of France’s unemployment insurance and pension systems in coming months.

Ms Le Pen and Mr Philippe both spoke of the transformation of French politics that began with the presidential election two years ago. The conservative Les Républicains and the Socialists, who ruled France for half a century after the second World War, both came in at well under 10 per cent on Sunday night.

“The decline of the old parties and the bi-polarisation between the RN and LREM confirms that the new division between nationalists and globalists that now dominates our political life is a lasting phenomenon,” Ms Le Pen said.

She listed deserters from left and right who have joined RN, and invited “all patriots” to support the party in next year’s municipal elections, and in regional and departmental elections in 2021.

Mr Philippe said he could not be indifferent to the rise of the far right, “which election after election becomes more deeply rooted in the French political landscape, to the point of becoming one of the main political forces...It is not enough to speak of anger, rejection or crisis. The extreme right is consolidating its position, and many of our compatriots have the impression it is time to turn inward and adopt extreme solutions.”

The ecologist party EELV made a breakthrough, coming in third at an estimated 13.1 per cent of the vote, ahead of the Socialists and the far-left France Unbowed.

Many predicted that the Socialists would not even reach the 5 per cent threshold required to send an MEP to the European Parliament. The former ruling party allied itself with Place Publique, led by the essayist Raphael Glucksmann. He was obviously pleased that the alliance won an estimated 6.7 per cent of the vote, equal to the score of France Unbowed.

It was a huge comedown for Jean-Luc Mélenchon, the leader of France Unbowed, who won 19.6 per cent in the first round of the presidential election in 2017.

Mr Macron had attempted to play his “green card” by convening an “ecological defence council” last week and promising to abandon plans for an open-air gold mine in French Guyana, a long-standing demand of the EELV.