Rebuke to Romania’s populists in European elections and referendum 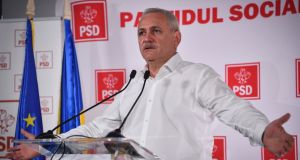 PSD leader Liviu Dragnea speaks during a press conference in Bucharest on Sunday after the closure of polling stations for the Europan parliament elections. Photograph: Daniel Mihailescu/AFP/Getty Images

Romanians have delivered a rebuke to their ruling Social Democrats (PSD) by strongly backing opposition parties in the European elections and voting in a referendum aimed at blocking the government’s sweeping judicial reforms.

The European Union has warned Romania that it may take legal action if the PSD-led government continues to pursue changes to the criminal justice system that critics say threaten the rule of law and the country’s fight against rampant corruption.

Exit polls showed both the PSD and the centre-right National Liberal Party on 25.8 per cent, just ahead of the new USR-Plus alliance of reformist, anti-corruption parties on 23.9 per cent.

Such a result would be a major setback for the PSD, which easily won European elections five years ago with 37.6 per cent and took 45.7 per cent in the 2016 parliamentary elections.

The PSD suffered another blow in a non-binding referendum called by one of its most vocal critics, Romanian president Klaus Iohannis, which was held alongside the European elections.

Voters were asked whether the government should be barred from using emergency decrees to change justice legislation and whether they supported a ban on any amnesty for people convicted of corruption.

The PSD – whose leader Liviu Dragnea has been found guilty of vote rigging – hoped it would not pass the 30 per cent turnout threshold for the result to be valid, but elections officials said 41.3 per cent of voters took part.

“You have participated today in large numbers in elections for the European parliament and in the referendum. You have given a clear vote, a firm vote, a vote that cannot be ignored by any politician in Romania.”

A gloomy Mr Dragnea said the predicted election results “give the PSD no cause for happiness. There must be swift and serious analysis in the party.”

Survey results released on Sunday night by pro-government polling agency Nezopont said Fidesz was set to take 56 per cent of ballots, with the Socialists and centre-left Democratic Coalition trailing far behind on 10 per cent.

“I hope that there will be a shift in the European public arena in favour of those political parties who would like to stop migration,” said Mr Orban, whose government faces EU legal action over its treatment of migrants, NGOs and the liberal Central European University in Budapest.

The EPP suspended the increasingly hardline Fidesz in March, and Mr Orban warned that if the EPP failed to take a tougher line on immigration then his party could defect to the far-right group of Italian interior minister Matteo Salvini.

“We would not like to belong somewhere where we don’t have an influence on the main strategy issues,” Mr Orban said.

In Slovakia, unofficial projections suggested that the liberal Progressive Slovakia-Spolu coalition would win with 20 per cent, ahead of the populist Smer party on 15.7 per cent and far-right People’s Party-Our Slovakia on 12 per cent.

In Croatia, projections by the Ipsos polling agency put ruling conservative Croatian Democratic Union in the lead with 23.4 per cent of votes, with the Social Democrats second on 18.4 per cent.

Exit polls in Bulgaria suggested that the governing centre-right Gerb party would take 32.7 per cent of votes, ahead of the Socialists on 23.2 per cent and the liberal Movement for Rights and Freedoms on 13.6 per cent.