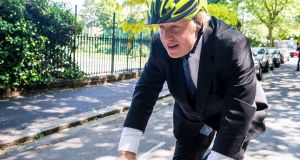 Boris Johnson leaving his London home on the day of the European elections on May 23th. Photograph: Luke Dray/Getty Images

I’ve noted on several occasions how the search for a Brexit solution resembles physicists’ hunt for dark matter. Without the existence of mysterious stuff that has mass several times that of the known universe, we wouldn’t, according to the equations, exist. Dark matter will either be eventually found or the equations rewritten.

Logic dictates that one or the other will happen, mostly based on mathematics. As with most forecasts, we can be confident something will happen, but not sure when. The puzzle of our existence will one day be solved but I fear that is not true of Brexit.

If there once was a potential Brexit solution, it no longer exists. The similarities with the search for dark matter have broken down. Scientists used to look for particles called Wimps (don’t ask) to explain the universe. The failure to find Wimps, despite years of looking, has convinced many boffins to give up. They believe dark matter must still be out there, it’s just a question of looking in a different place.

By contrast, we could spend the rest of time looking for the Brexit solution: that quest is as doomed as is the search for Wimps.

Quantum physics also teaches us that we live in a probabilistic world. That’s one similarity with Brexit that hasn’t disappeared. How have the probabilities changed now that Theresa May has been destroyed, like Thatcher, Major and Cameron before her, by the European question?

The chances of a no-deal Brexit are now higher than ever. Contingency planners would be well advised to consider it the most likely scenario. Lots of factors point to this outcome. Perhaps the biggest is that it’s the only one that Boris Johnson can both promise and deliver.

Another pointer to a hard Brexit is that Nigel Farage has managed to convince around one-third of the British electorate to demand one. Yet another is that the electors of the next prime minister - the 100,000 or so members of the Conservative party - also seem to want one. It’s a compelling narrative.

We know all the things that Johnson - or whoever is the next PM - can’t do. Anything Theresa May tried for one thing. To get elected, he or she will have to convince both MPs and Tory party members of something. The only plausible narrative is a hard Brexit.

Any guff over renegotiating the Withdrawal Agreement should be ignored. That Parliament as currently constituted would oppose a no-deal outcome is neither here nor there. The arcane procedures that previously allowed MPs to take some semblance of control over the process will not be allowed to recur.

All they will be permitted to do is to express non-binding opinions. Their only weapon will be a nuclear one: a no-confidence vote in the new PM that will in turn trigger a general election. Turkeys, Christmas and all that.

All that Johnson will have to do is precisely nothing: Britain leaves by strict rule of law at the end of October in the absence of something pretty dramatic happening.

Some analysts think that points to another extension. Johnson has already ruled that out and, even if he breaks that promise (always a possibility), European leaders, with President Macron of France in the vanguard, may well be minded not to grant another delay. What would be the point?

The problem is now unsolvable. Ironically, Farage has borrowed from two European political phenomena, one new, one old. Firstly, his digital campaign to create a mass political movement from scratch owes much to the methods that have installed the far-right in Italy.

Secondly, he has adapted the ‘stab-in-the-back’ myth that allowed ultra right-wing nationalists to gain power in Germany between the wars. His “Brexit-betrayal” speeches have given wings to the populist surge in Britain that, now unleashed, could lead anywhere.

Betrayal is cried anytime anyone suggests a policy that is not liked. In particular, anyone promoting a Brexit compromise is now immediately branded a traitor.

Consequently, compromise now looks to be impossible. Anyone standing in the middle of the political road knows that they are likely to be run over. Pragmatic and self-interested politicians rush to stand anywhere but on that centre ground.

That all of this is both dangerous and volatile almost doesn’t need saying. Any politician who plots a way forward that tries to bring people together down a path of compromise risks almost certain failure.

Appearing to be reasonable and thoughtful is career suicide. How did British governance reach this state of affairs? Theresa May has a lot to answer for.

Even hard Brexit, probable though it is, won’t be the solution. It will be just the start - a chaotic if not catastrophic one - of another interminable process. One consequence will, in my view, be a likely break-up of the union.

Brexit is a quintessentially English nativist project.Those contingency planners would be well advised to think about not just hard Brexit but also a united Ireland.