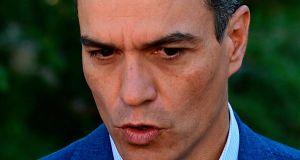 Spanish prime minister Pedro Sánchez: “Today we decide the future of Europe and of Spain for the next few years,” he tweeted before voting in Madrid. Photograph: Javier Soriano

The Socialist Party was heading for victory in Spain’s European election on Sunday night as the far-right Vox won seats in the EU parliament for the first time.

It was a poor night for the PP, which appeared to be on course to lose control of the Madrid region for the first time in a quarter of a century, in a local election there.

As well as the EU ballot, elections were held in 12 of Spain’s 17 regions and in towns and cities across the country, leading the day to be dubbed “Super Sunday”.

“Today we decide the future of Europe and of Spain for the next few years,” Socialist prime minister Pedro Sánchez tweeted early in the day before voting in Madrid.

Exit polls from the EU election echoed the swing to the left in Spain that was signalled by last month’s general election. Sánchez’s Socialists won that ballot, albeit without securing a parliamentary majority, handing the PP the heaviest defeat in its history.

Although the PP lost ground in the EU election, it managed to hold off the challenge of the Ciudadanos party, which has been attempting to assert itself as the main force on the right and the leading party of opposition. Exit polls showed that although it made substantial gains, Ciudadanos remained in third place, ahead of the leftist Unidas Podemos, which performed strongly after a disappointing general election.

Exit polls also showed that Catalan pro-independence parties won seats in the European election. Carles Puigdemont, candidate for the Together for Catalonia-Free for Europe (JxCat) ticket, fought a legal battle in order to be able to run from Belgium where he is in self-imposed exile and looked set to win a seat. This potentially opens the door to his return to Spain, given that he believes he will have parliamentary immunity.

The leader of the Catalan Republican Left (ERC), Oriol Junqueras, who is in prison and facing trial for rebellion in the supreme court, was also on course to win a European seat. Both men are keen to use the EU parliament as a platform to carry the Catalan independence message to the international community.

In Madrid, leftist mayor Manuela Carmena looked to be on course to remain in power. In the Madrid region, parties on the left appeared to have enough seats to unseat the PP for the first time in 24 years.