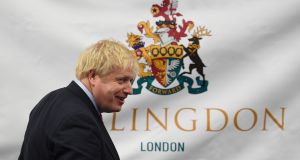 The scale of Boris Johnson’s victory means he will be able to pass his withdrawal agreement through Parliament on January 31st without difficulty. Photograph: Oli Scarff/AFP via Getty

Boris Johnson has achieved a political triumph of historic proportions, reshaping the parliamentary map of Britain to win a resounding mandate for taking Britain out of the European Union on his terms.

He has done so by bulldozing through the “Red Wall” of former Labour strongholds stretching from northeast Wales across the north of England and into the midlands with his promise to get Brexit done.

The scale of his victory means he will be able to pass his withdrawal agreement through parliament on January 31st without difficulty, snuffing out any hope among Remainers of halting Britain’s departure from the EU. It also gives him generous room for manoeuvre in negotiations on Britain’s future relationship with the EU, with little fear of being held hostage by any faction within his party.

Johnson will be the dominant figure in British politics for the next five years, with a mandate to pursue his agenda of higher spending on health, education and policing and tough policies on crime. 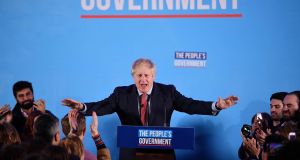 The result is a catastrophe for Labour, which hoped for a closer outcome on account of the popularity of many of its policies. Canvassers reported Jeremy Corbyn’s leadership was a bigger problem than Brexit on the doorsteps, and as the scale of the defeat became apparent, he announced that he will be stepping down. He did not set out a timetable for his departure, but he is under pressure to leave without delay.

The leadership contest that follows will be a battle over the party’s culture as well as its ideology, and although Corbyn’s allies will work hard to resist a move towards the political centre, they will struggle to avoid the blame for the party’s worst performance at a general election for decades.

Liberal Democrat leader Jo Swinson was the most high-profile casualty of the election, losing her East Dumbartonshire seat as her party faced the prospect of returning to Westminster with 13 MPs. That is one more than in 2017 but seven fewer than before this election after their ranks were swelled by defectors from Labour and the Conservatives.

It was Swinson who precipitated the election as her party experienced a poll surge, leading the other parties in giving Johnson the numbers he needed to trigger the vote under the Fixed Term Parliaments Act.

Apart from the Conservatives, the other big winners of the night, according to the exit poll, are the Scottish National Party (SNP), which looks set to win 52 of Scotland’s 59 seats. Such an overwhelming mandate for the SNP, combined with the certainty of Brexit on Johnson’s terms, is likely to fuel support for a second independence referendum in Scotland, and Nicola Sturgeon was quick to claim the result as a mandate for a fresh referendum.

The DUP was among the biggest losers of the election, with deputy leader Nigel Dodds and Emma Little-Pengelly losing their seats as the party failed to capture North Down, where its candidate had been the favourite.

The scale of the Conservative victory means Johnson will have no need for the DUP’s support and no political incentive to heed their concerns about the impact of his Brexit deal on Northern Ireland’s relationship with the rest of the United Kingdom.