Analysis: For the first time in the campaign, the focus is on the party’s policies 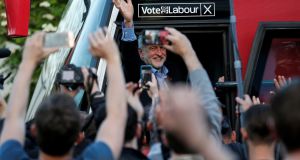 The leak of Labour’s draft manifesto was, at first sight, just another shambolic moment in a blunder-strewn campaign. Here was Jeremy Corbyn’s party again stepping on its message and stealing its own thunder ahead of the formal manifesto launch next week.

That, at least, was the instant verdict at Westminster, as much of the press and the broadcast media reached for Gerald Kaufman’s denunciation of Labour’s 1983 manifesto as “the longest suicide note in history”. The Telegraph and the Daily Mail described the leaked manifesto as a blueprint to return Britain to the 1970s, as others spoke of a “hard left” menu of socialist aspirations.

After such a build-up, the document itself could not fail to disappoint. Anything but revolutionary, its wish list is solidly within the mainstream of European social democracy. It is Ed Miliband’s vision for Britain with knobs on, but not too many.

The 1983 manifesto called for unilateral nuclear disarmament, the abolition of the House of Lords, withdrawal from the European Economic Community and the renationalisation of British Telecom, British Aerospace and British Shipbuilding.

Corbyn’s manifesto commits Britain to spending 2 per cent of GDP on defence and to keep the Trident nuclear weapons system (although it warns that it should be used with caution). Labour would bring the Royal Mail back under public ownership and gradually renationalise the rail system, both popular policies. On energy, it would follow Germany’s lead in allowing state-owned companies to compete with private providers.

There would be extra funding for the health service and social care, third-level tuition fees would be abolished and pensions would increase. And Labour would tackle the housing crisis by building 100,000 new council homes every year.

By the time Labour functionaries and their union allies met on Thursday to discuss the draft document, it was clear that the leak was not the disaster it had appeared to be. For the first time since the campaign began, the focus was on Labour’s policies and many of them are popular.

The party now has a chance to tweak the manifesto before its official launch next week, when the public can take another look at its policies. None of this is likely to deliver a Labour government next month but given Corbyn’s unpopularity, any day when the conversation is about policies rather than personalities is a good day for Labour.

1 Coronavirus: Two more deaths confirmed amid concern over new clusters
2 Cluster of Covid-19 infections at Kerry ‘house party’ investigated
3 Paschal Donohoe’s victory seen as a revolt against EU’s ‘big four’
4 Reopening of pubs that do not serve food may be delayed beyond July 20th
5 Covid-19: Cases rise in US, India as Australian spike leads to localised lockdown
Real news has value SUBSCRIBE