May’s foreign policy cannot be judged by its electoral effect

Janan Ganesh: For the rest of the world, the UK election is a complete non-event 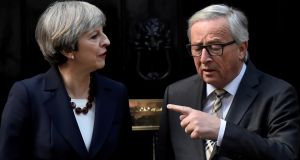 In a BBC film broadcast last week, the singer Carly Simon performed the previously unheard fourth verse of You’re So Vain. The song is about a narcissist who assumes that people with whom he has severed relations continue to think of nothing and no one else.

In other news, Britain has accused the EU of a plot to influence its general election. Theresa May implied that elements in the European Commission tried to sway British voters through the classic ruse of a German-language splash in the Frankfurter Allgemeine Zeitung.

The prime minister’s wrongness on this point is not the worst part of this saga, but it deserves to be established. The previous election in 2015 interested the outside world because the Conservatives promised a high-risk referendum on Europe and the Labour opposition did not. The 2010 election mattered as a quarrel over fiscal management, which was, as strange as it is to recall, the biggest subject in western politics at the time. The 2005 election mattered as a test of a martial nation’s frame of mind after the botched war in Iraq. Next to these, the election in June is a global non-event. Not since 2001 have the British gone to the polls to such international indifference.

Any Conservative who believes their imminent landslide matters, either as a focus of subversion by the EU or as leverage against it in the Brexit talks, should scan the foreign press and visit a continental capital or two. (For a sting to the pride, search the American media for a mention of it anywhere).

Europeans see the election as a procedural detail to get out of the way before the serious work of negotiation. Tories wrote and spoke of the EU’s obliviousness to national democracy for decades. They now believe it will bend to their prime minister’s national democratic mandate or conspire to prevent it. They were right the first time.

If May is livid at the disclosure of her remarks to Jean-Claude Juncker, the commission president, and Martin Selmayr, his chef de cabinet, she has cause. To leak the gist of a private dinner is normal political sport. A near-verbatim account, couched in a snide tone, is a breach of trust that will be hard to mend.

All the same, you would hope for a prime ministerial response that is consistent with the dignity of the office. You would hope a jibe at the “bureaucrats of Brussels” might embarrass anyone who is not a tabloid subeditor up against a deadline. To be briefed against in such scurrilous detail by the commission and still emerge as the belligerent of the piece constitutes an achievement of sorts.

But May’s speech was popular, say observers, and that insight, stated as though it settles the matter, has been worse than anything else. Whenever the prime minister says or does something demagogic, a certain kind of politico will tap the side of their nose, smile a wry smile and nod to the polls. “Ah,” they say, “but the nation loves it”, as if anyone disputes that. The question is whether it is good for the nation.

May is no longer an ambitious cabinet member who can be judged on her eye for a news story and her feel for the public mood. She is the leader of a major state that is about to undertake its most important work since the second World War. She may turn out to be a natural at it and negotiate fine exit terms, but that is the test. Her performance in a public-relations tournament with a couple of foreign officials who barely know they are taking part should be too frivolous to analyse, much less reward with high praise.

A foreign policy cannot be judged by its electoral effect. When the Tories won local councils and mayoralties last week, the EU’s behaviour was said to have “backfired”. Never mess with May, roared the right, with that peculiar kind of confidence that is so near to insecurity. Almost a week on, I still cannot work out what they mean.

How would the EU’s negotiating hand be weaker for May’s domestic popularity? If it plans to punish Britain with a bad deal, why should it resent a huge vote for someone who wants a hard exit anyway? If it hopes to keep Britain close, why would it prefer Jeremy Corbyn, the Labour leader who campaigned even less for EU membership as an interlocutor?

If May irradiated all currency and gold reserves rather than hand over a pound to the EU, some genius would say how well it played with the crucial retired East Anglian home-owner demographic. This is the political class at its most inane. The problem is not the prime minister’s failure to rise from electoral tactics to the national interest, but ours.