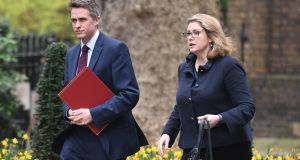 Gavin Williamson has been summarily sacked as the UK’s defence secretary following an inquiry into an unprecedented leak from the National Security Council over Huawei’s involvement in the UK’s 5G network.

In a letter to Mr Williamson, a former rising star in the Conservative Party, Theresa May said he had failed to engage with the leak inquiry, led by cabinet secretary Sir Mark Sedwill, and that the evidence suggested he was to blame.

“I put to you the latest information from the investigation, which provides compelling evidence suggesting your responsibility for the unauthorised disclosure,” the prime minister wrote. “No other, credible version of events to explain this leak has been identified.”

“It is vital that I have full confidence in the members of my cabinet and of the National Security Council. The gravity of this issue alone, and its ramifications for the operation of the NSC and the UK’s national interest, warrants the serious steps we have taken, and an equally serious response.”

In response Mr Williamson released a letter to the prime minister in which he “strenuously” denied being responsible for the leak.

Mr Williamson, who has served at the Ministry of Defence since 2017, was a close confidant of Mrs May in the run-up her Conservative Party leadership campaign in 2016 and later served as the government chief whip.

“The prime minister’s decision has been informed by his conduct surrounding an investigation into the circumstances of the unauthorised disclosure of information from a meeting of the National Security Council,” said a Downing Street spokesman.

Mr Williamson will be replaced by Penny Mordaunt, who served as international development secretary. She is the first female defence secretary. Ms Mourdant is in turn replaced by Rory Stewart, who is promoted from justice minister.

The National Security Council is chaired by Mrs May and brings together cabinet ministers and senior officials involved in foreign and defence policy. It agreed this month that Huawei could build some parts of Britain’s 5G networks.

Tom Watson, the Labour deputy leader, said that if Mr Williamson had leaked from the NSC “he should be prosecuted under the Official Secrets Act. And he should forgo his ministerial severance pay”.

Vince Cable, leader of the Liberal Democrats, called for a criminal investigation into Mr Williamson’s conduct and a potential breach of the Official Secrets Acts.

“This story cannot begin and end with dismissal from office. What is at stake is the capacity of our security services to give advice at the highest level,” he said. “This must now be referred to the Metropolitan Police for a thorough criminal investigation into breaches of the Official Secrets Act.”

One senior military official said there was “significant surprise” inside the MoD at Mrs May’s decision.

The official praised Mr Williamson’s time in charge of the department, saying he had been “hugely positive” for defence. “No one could say he didn’t have defence’s interests and the nation’s security at heart.

“The caricature of Private Pike was wide of the mark and unfair. His legacy will be more money for defence and more headlines – unfortunately not always good ones.”

One former MoD official said that there was a “certain inevitability” to Mr Williamson’s departure, given the number of colleagues who may have been “gunning for him”.

But the former official added: “Of all the things that have gone on, he is right on Huawei. I am not sure this was the most sensitive leak of intelligence and no agent in the field was put at risk. Whatever happened, this is a debate that should have been held in public.” – Copyright The Financial Times Limited 2019