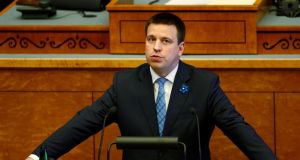 Estonia’s controversial new coalition government has been rocked by the resignation of a far-right minister just one day after taking power.

Marti Kuusik, the minister for technology and foreign trade, stepped down after prosecutors said they were investigating reports linking him to domestic violence. He strongly denies any wrongdoing.

His departure added to domestic and international concerns that the high-tech Baltic state, known for its stability and progressive outlook, could be entering a turbulent period due to the rise of the nationalist Estonian Conservative People’s Party (Ekre).

It came third with 18 per cent of votes in March’s parliamentary election, and joined forces with the second-placed Centre party and fourth-placed Fatherland group to keep the centre-right Reform party, which won the ballot, out of office.

Ekre appeals to poorer and provincial voters with its strongly Eurosceptic and anti-immigration stance and criticism of liberal social policies in Estonia, which in 2016 became the first former Soviet state to legalise same-sex partnerships.

“Let me again confirm that the accusations made against me are slander. I am not someone who engages in violence,” Mr Kuusik said on Tuesday of the police investigation and what he called a “terrifying media attack” against him.

“In a situation like this, it is not possible for me to carry out my work as minister. Furthermore, the rest of the government is not able to work normally.”

Prime minister Juri Ratas accepted Mr Kuusik’s resignation, saying: “On this, we have no room for justifications or doubt, because we know that there are thousands of victims of domestic violence in Estonia. I unequivocally condemn all violence in families and close relationships.”

When President Kersti Kaljulaid swore in the new cabinet in Tallinn’s parliament on Monday, she walked out of the chamber when it was Mr Kuusik’s turn to take the oath, leaving him to face an empty chair.

She also wore a sweater for the ceremony emblazoned with the words “Speech is free”, to highlight fears among liberal Estonians that their views are increasingly being silenced by strongly conservative and intolerant voices.

Ekre is led by Mart and Martin Helme, a father and son who are now interior and finance minister respectively, while Mart’s nephew Peeter Helme is editor-in-chief of Estonia’s main conservative daily newspaper, Postimees.

When they took office, the two Helmes riled critics by flashing the traditional “Okay” hand signal, which is now used as a salute by some white supremacists.

Mr Ratas, who has been premier since 2016, refused to forge a coalition with Reform in which his Centre party would have been the junior partner, and instead formed a cabinet in which Centre, Ekre and Fatherland each have five ministers.

In March he ignored a plea not to ally with Ekre from Guy Verhofstadt, leader of the liberal Alde group in the European Parliament to which Centre belongs.

Mr Verhofstadt said Ekre was “reminiscent of fascist regimes in Europe” and warned that “co-operation would be harmful for the Estonian society and its geopolitical position, and also cause irreparable damage to our excellent co-operation”.