April 18th, 2019: US attorney general William Barr says that special counsel Robert Mueller's investigation did not find that Donald Trump or members of his campaign worked with Russia during the 2016 presidential election. Video: Reuters 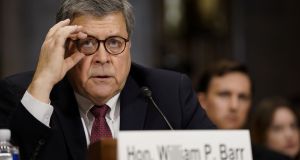 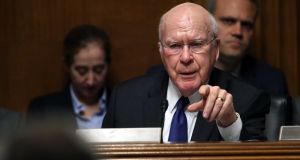 US attorney general William Barr defended his handling of the Mueller investigation during a fiery appearance at a US Senate committee on Wednesday.

In his first appearance before Congress since he released a redacted version last month of special counsel Robert Mueller’s investigation into Russian interference in the 2016 election, Mr Barr came under relentless questioning from Democrats on the Senate judiciary committee.

Mr Barr stood by his handling of the report’s publication and his finding that President Donald Trump did not obstruct justice.

His appearance at the committee took place hours after a letter from Mr Mueller to Mr Barr was released by Democrats. In the letter, Mr Mueller expressed his displeasure with the attorney general’s handling of his final report into his two-year investigation.

In particular, he said the four-page summary of the report released by Mr Barr on March 24th “did not fully capture the context, nature and substance” of the report’s findings, and caused “public confusion about critical aspects of the results of our investigation”.

But questioned by senators on Wednesday, Mr Barr criticised Mr Mueller’s decision not to come to a conclusion about whether the president had obstructed justice. “I think that if he felt that he shouldn’t go down the path of making a traditional prosecutorial decision, then he shouldn’t have investigated,” he said.

“Once we heard that the special counsel was not reaching a conclusion on obstruction, the deputy and I discussed and agreed that the [justice] department had to reach a decision, he said, in reference to deputy attorney general Rod Rosenstein. “We had the responsibility to assess the evidence as set forth in the report and to make the judgment.

“We concluded that the evidence developed during the special counsel’s investigation was not sufficient to establish that the president committed an obstruction of justice offence,” he said.

Towards the end of the hearing he also dismissed Mr Mueller’s letter as “a bit snitty”, adding that he believed it was written by one of his staff members.

He said that he had phoned Mr Mueller after receiving the letter and the special counsel had said to him that his concern was not that Mr Barr had misrepresented the report, but that “the press was reading too much into it”.

“He was very clear with me that he was not suggesting that we had misrepresented his report,” Mr Barr said, contradicting the contents of Mr Mueller’s letter.

During hours of questioning in a packed Senate committee room, Mr Barr also clashed with senators about a passage in Mr Mueller’s report that states that White House counsel Don Mc Gahn had been told by Mr Trump twice during the summer of 2017 to tell the justice department to remove Mr Mueller because of conflicts of interest.

Mr Mueller’s report quotes Mr McGahn as saying the president told him: “Mueller has to go.”

However, Mr Barr told the committee on Wednesday that “There is a distinction between saying to someone, ‘Go fire him, go fire Mueller,’ and saying, ‘Have him removed based on conflict’.”

Mr Barr, who was appointed by Mr Trump to lead the Department of Justice earlier this year after he fired his first attorney general Jeff Sessions, reiterated his legal view that a president has a right to remove a special counsel.

Following the hearing, several Democrats said Mr Barr should resign. Adam Schiff, chairman of the House of Representatives intelligence committee, said the attorney general had “misled the American people with his inaccurate summary of Mueller’s report, then he misled the Congress when he denied knowledge of Mueller’s concerns. How can he be trusted to impartially administer justice? He can’t”.

While Mr Barr was also scheduled to appear before a House of Representatives committee on Thursday, it was still unclear late on Wednesday if he would do so due to a dispute over the format of the meeting.