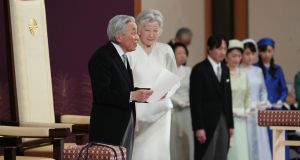 Japan’s emperor Akihito, flanked by Empress Michiko, delivers a speech during an abdication ceremony at the Imperial Palace in Tokyo. Photograph: REUTERS 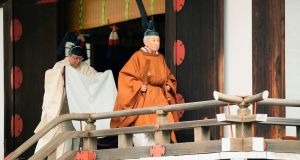 Japan’s Emperor Akihito (R) leaves after a ritual to report his abdication to the throne, at the Imperial Palace in Tokyo, on Tuesday. Photograph: Japan Pool via AP

Japan’s emperor Akihito has brought down the curtain on his 30-year reign as head of the world’s oldest hereditary monarchy.

His abdication at the Imperial Palace in Tokyo on Tuesday was marked by a series of religious rituals and a televised farewell speech.

Akihito said he had reigned “with a deep sense of trust on and respect for the people” and prayed for continued “peace and happiness” as he stepped down.

A survivor of prostate cancer and heart bypass surgery, Akihito (85) first hinted that he wanted to quit in a television address two years ago, before frail health left him unable to perform his official duties.

Japan has not had an emperor abdicate in over 200 years – and the move forced the government to pass one-off legislation allowing Akihito to retire.

Akihito’s eldest son, Naruhito (59) – an-Oxford educated Anglophile who once researched the history of the River Thames – becomes the nation’s 126th emperor at midnight on Tuesday.

In an official ceremony on Wednesday, Naruhito will inherit the symbols of imperial power, including a sword and a jewel supposedly handed down over generations of emperors.

Legend dates the Japanese monarchy back to before the birth of Jesus Christ. The emperor is mythically descended from the sun goddess, Amaterasu.

Akihito’s father, Emperor Hirohito, renounced his divinity during the US-led occupation of Japan after the second World War. Under the constitution, written during the occupation, the emperor is defined as a symbol of state and barred from taking part in politics.

Akihito is credited with helping to redefine the role of the remote monarchy by marrying a commoner and travelling around Japan to meet victims of natural disasters. His frequent visits to Asian countries helped make amends for the damage inflicted by the Japanese military during the Pacific War.

Much of his reign, known as Heisei, was marred by economic stagnation and tragedy, including the 1995 earthquake that destroyed much of Kobe City and the 2011 quake and tsunami that killed thousands and left the country’s north-east coast in ruins. The economy has rebounded over the last decade.

Donald Trump was among the world leaders to thank Akihito for his service, stressing the “tremendous importance” of the US relationship with Japan. Mr Trump will become the first world leader to meet the new emperor later this month, an honour not without risk – given his history of diplomatic faux pas.

The ascension of Akihito’s eldest son leaves just two heirs to the chrysanthemum throne: Naruhito’s brother Akishino and Prince Hisahito, the emperor’s only grandson, aged 12. The dearth of successors means the question of allowing a woman emperor will almost certainly return during Naruhito’s lifetime.

Naruhito married his wife, Masako Owada, a diplomat, in 1993. The couple’s only child Princess Aiko, born in 2001, is barred from becoming empress under Japan’s male-only succession rules. Princess Masako will not attend her husband’s ascension rites, which are limited to male members of the imperial family.

After his installment, Naruhito will move into the Imperial Palace on 115 hectares in the centre of crowded Tokyo. His father will become Emperor Emeritus and retire from all public duties, moving into a residence a few miles away.

Naruhito’s ascension officially begins the Reiwa era, which the government has translated as “beautiful harmony”.

Singapore prime minister Lee Hsien Loong, who congratulated Akihito in a letter on Tuesday, said the Heisei era of 1989 to 2019 “will be remembered as an era of peace and stability for Japan”.