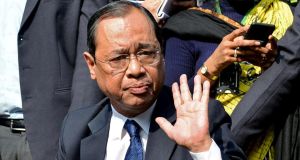 Ranjan Gogoi has rejected the allegations as ‘baseless’. Photograph: Reuters/Stringer/File

A woman who accused India’s chief justice of sexual harassment says she will no longer participate in a judges’ panel investigating her allegations, as she does not expect to receive justice.

In a press statement the 35-year-old legal assistant, whose identity has not been publicly disclosed on legal grounds, cited four reasons for deciding against appearing before the three-judge committee inquiring into her complaint against chief justice Ranjan Gogoi.

She claimed the committee had refused her counsel permission to attend its hearings, despite her “impaired hearing, nervousness and fear” and that there were neither video nor audio recordings of its proceedings into Mr Gogoi’s reported sexual advances against her last October.

The former supreme court employee also stated that she had not been provided with all the court documents pertaining to her compliant, nor informed about the procedure the committee was pursuing in its inquiries.

“I found the atmosphere of the committee frightening and was nervous because of being confronted and questioned by three supreme court judges without the presence of my lawyer/support person” she said.

The complainant added that she was left “guessing and anxious on all these matters” and had hoped that the committee’s approach towards her would be “sensitive” and not one that provoked ‘further anxiety and trauma’.

It remains unclear,as to what procedure the inquiry committee will pursue in its investigation, as there are neither guidelines nor a precedent for such allegations to be made against the country’s most senior legal officer.

Earlier, in a sworn affidavit sent to all supreme court judges over the weekend, the complainant had alleged two instances of “sexually inappropriate conduct” by Mr Gogoi at the office in his residence on October 10th and 11th, 2018. This was just a week after he was appointed India’s chief justice.

She claimed that Mr Gogoi had grabbed her around her waist, ignored her vociferous protests had touched her all over her body with his hands before forcing himself against her. When he did not stop, she said in her affidavit, she had forcibly pushed him away.

Mr Gogoi then is allegedd to have told her not to mention the incident as her “family would be greatly disturbed” by it. Within weeks of the alleged incident, she said, she was transferred three times to different legal offices, before being sacked in December.

She also alleged that her husband and brother, who were police constables in Delhi, were abruptly suspended from their jobs on specious grounds. “It now seems like harassment, victimisation and torture will not stop unless I speak out about the origin and motive for the harassment,” she said in her affidavit.

In it she also claimed that Mr Gogoi had forced her to delete intimate WhatsApp messages the two had exchanged several months before the alleged sexual incident took place.

Mr Gogoi rejected the allegations as “baseless” and said there were “bigger forces” behind the court assistants’ accusations that were trying to “destabilise” the judiciary ahead of important cases it was deciding.

“I don’t want to stoop so low as to answer these charges,” Mr Gogoi had said as head of a hastily summoned three-judge bench that summarily rejected the sexual harassment charges against him. He said he treated all supreme court employees “respectfully”.

A day later, following widespread criticism over Mr Gogoi’s arbitrariness in heading a court in which he himself was the accused, an in-house committee of three supreme court judges – including two women – was set up to investigate the matter. The complainant has now withdrawn from participating in that inquiry.