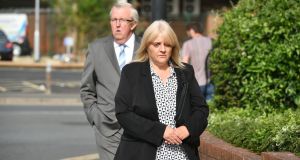 Image from July 2019 of Sherry Bray and Christopher Ashford, who have been jailed at Swindon Crown Court for illegally accessing footage showing the postmortem of Emiliano Sala. Photograph: Ben Birchall/PA Wire

Two workers from a British CCTV firm were jailed on Monday for accessing graphic mortuary footage, later circulated on social media, of the body of the late Argentine soccer player Emiliano Sala, who was killed in a plane crash in January.

Sala (28) was flying from western France, the location of his previous club Nantes, to Wales to join Cardiff City when the Piper Malibu aircraft disappeared over the English Channel.

After his body was recovered, Sherry Bray (48) and Christopher Ashford (62) accessed footage of his body in the mortuary during a postmortem and the images later appeared on social media.

“It is impossible to imagine why anyone would wish to record or view these sorts of images in such a flagrant breach of confidentiality and human decency. It was truly appalling and they both now face time in prison as a consequence.”

Police launched an investigation in February after officers became aware that a graphic image of the postmortem of Sala was appearing on social media.

They raided the offices of the closed circuit TV firm which held the out-of-hours contract to monitor the mortuary and discovered that the company’s director, Bray, and another member of staff, Ashford, had illegally accessed the footage.

Bray had taken photographs of the footage on her mobile phone and then sent the pictures to another person on Facebook Messenger, police said. Evidence showed Bray had also taken pictures of another body in the mortuary.

Bray, who pleaded guilty in August to three counts of computer misuse and perverting the course of justice, was jailed for 14 months at Swindon Crown Court.

Ashford, who admitted three counts of computer misuse, was sentenced to five months in prison. – Reuters