Labour peer Peter Hain named Philip Green as the businessman at the heart of the sexual harassment and bullying allegations which the Daily Telegraph was barred from reporting by an injunction. Video: Parliamentlive.tv 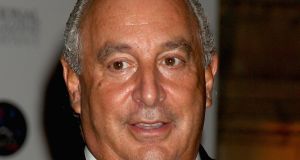 Philip Green has been named as the businessman at the centre of abuse allegations uncovered by the UK’s Daily Telegraph, making the billionaire retailer the highest-profile Briton embroiled in the global backlash against sexual harassment.

Sir Philip’s name was made public when Peter Hain, the former Labour MP and cabinet minister, identified the chairman of Arcadia Group in parliament after the court of appeal stopped the Telegraph from disclosing his identity.

Lord Hain said he felt a “duty” to use his parliamentary privilege to name the tycoon, whose empire includes the Topshop fashion chain.

According to the interim inunction against the Telegraph, five employees at Sir Philip’s companies made allegations of “discreditable conduct” against him, behaviour which the newspaper reported included sexual harassment and racial abuse.

Sir Philip issued a statement saying he “categorically and wholly” denied any allegations of “unlawful sexual or racist behaviour”.

“Arcadia and I take accusations and grievances from employees very seriously, and in the event that one is raised, it is thoroughly investigated,” Sir Philip said, adding such complaints were not uncommon in large businesses.

“In some cases, these are settled with the agreement of all parties and their legal advisers,” he added. “These settlements are confidential so I cannot comment further on them.”

The “cheap chic” innovator has long been a controversial figure in British business circles, most recently following the 2016 collapse of BHS, the high street chain that made him a billionaire.

He was criticised for allowing the chain to wither in the years after taking hundreds of millions of pounds in dividends out of the business; BHS’s subsequent demise cost 11,000 jobs and triggered a pensions crisis he ultimately paid £363 million to solve.

The new allegations immediately led to calls for Sir Philip to be stripped of his knighthood.

“He narrowly and luckily escaped losing his knighthood over the pensions scandal,” said Vincent Cable, leader of the Liberal Democrats and a former business secretary. “If these allegations are correct, he should certainly be stripped of his knighthood.”

Lord Hain said in the House of Lords that he had been contacted by “somebody intimately involved in the case”, which saw the Telegraph barred from reporting the allegations because the “powerful businessman” had used “non-disclosure agreements and substantial payments to conceal the truth about serious and repeated sexual harassment, racist abuse and bullying which is compulsively continuing”.

Lord Hain, who served in the cabinets of both Tony Blair and Gordon Brown, added that he felt disclosure was “clearly in the public interest”.

Sir Philip has spent close to £500,000 in legal fees in a bid to injunct the Telegraph, the newspaper reported. In an email to staff, Robert Winnett, the Telegraph’s deputy editor, said the paper was still “subject to an injunction”, meaning it will probably be unable to publish details of the allegations.

“[P]lease be careful not to go beyond reporting what Lord Hain has said in Parliament or what we are reporting in our paper/online,” read Winnett’s email.

The court of appeal had ruled that the “substantial payments” made as part of settlement deals had “compromised” the accounts of the five employees levelling charges against Sir Philip. The settlements also contained non-disclosure agreements (NDAs).

Jess Phillips, a Labour MP who has emerged as a leading critic of the use of NDAs to squelch harassment claims, welcomed Lord Hain’s decision to name the executive accused.

“It is no surprise to me that a man with such a terrible reputation in every regard also has a disregard for his employees,” said Ms Philips. “His power and his money bought him cover only for moments and I’m glad that riches are not a get out of jail free card.”

NDAs have been criticised for being used by the wealthy and powerful to silence victims of sexual harassment. On Wednesday, British prime minister Theresa May said it was “clear” that some employers were using them “unethically”.

Maria Miller, the Conservative MP who chairs the House of Commons women and equalities select committee, said: “Given the huge influence Philip Green wields in the world of business, it is surprising the court of appeal decided it wasn’t in the public interest to make public the string of payments that have been made.

“It’s unacceptable that the current system allows the use of NDAs to cover up serial offenders and that cannot be allowed to continue.” – Copyright The Financial Times Limited 2018