Brussels summit champions global co-operation in face of US protectionism 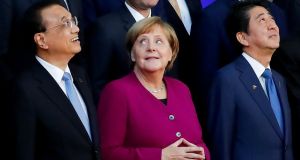 Fifty one EU and Asian leaders on Friday sent out a defiant alternative vision championing global co-operation and commitment to common international organisations against the tide of protectionism and unilateralism emanating from Washington.

South Korea’s foreign minister, Kang Kyung-wha, told a press conference at the close of the Europe-Asia summit in Brussels that the leaders had affirmed a strong commitment to “a rules-based international order and to the centrality of multilateralism” in trade, security, politics and on climate change.

Germany’s chancellor, Angela Merkel, delivered a blistering critique of US president Donald Trump’s “America First” trade vision of a world in which there were only winners and losers: “I believe that we can make it clear that the world is about creating win-win situations, making it clear that what benefits one can also benefit the other.”

She set the tone of the meetings. The two summits on Thursday and Friday, the 12th Asia-Europe Meeting, and the EU-Korea summit, brought together 28 EU heads of state and government, two further European states, Norway and Switzerland, and leaders from 21 Asian states.

A subset of the Asian bloc, the trading group Asean, also separately met the EU leaders.

The EU has recently signed important trade agreements with Singapore (on Friday) and Japan. Four other Asian deals are under discussion with Vietnam’s close to signing. The deal this year with Japan (not part of Asean) was the biggest negotiated by the EU and will create an open trade zone covering more than 600 million people.

They are agreements the UK hopes to replicate and improve on when it breaks free from the EU, and British prime minister Theresa May spent the day tentatively sounding out those potential partners in bilateral meetings: China, Thailand, Korea and Singapore, among others.

British officials were saying all the meetings were positive with the Chinese prime minister, even saying he looked forward to “ushering in a diamond era in their relationship”.

The main message of the meeting was directed firmly at Mr Trump at a time when he is repudiating international trade and climate agreements and the role of the UN. The Asia-Europe meeting represents a strong countervailing commitment to multilateralism and to international co-operation in which the UN and World Trade Organisation play central roles.

“We believe that only a multilateral approach will allow us to confront the global challenges,” European Commission president Jean Claude Juncker told the meeting.

Its second theme was strengthening inter-connectedness between the two continents on all levels, from trade to physical infrastructure and transport links across Asia, to security co-operation, digital links, investment and people-to-people ties.

On climate change, the leaders echoed the EU summit’s welcome on Thursday of the latest UN Intergovernmental Panel on Climate Change report, which contained dire warnings about the need for urgent action. “They expressed their profound concern that current global efforts are insufficient to meet the temperature goal of the Paris Agreement [on climate change], despite its repudiation by Washington.