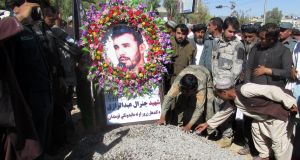 People attend the burial of Gen Abdul Razeq, the Kandahar police commander who was killed in an attack in Kandahar province, Afghanistan, on Thursday. Photograph: Ismail Sameem/Reuters

Saturday’s parliamentary election in the southern Afghan province of Kandahar will be delayed by a week after the assassination of one of the country’s most powerful security chiefs dealt a stunning blow to the Western-backed government.

Gen Abdul Razeq, the Kandahar police commander, was killed outside the provincial governor’s office on Thursday, when a bodyguard opened fire on a group of officials as they left a meeting with Gen Scott Miller, the commander of US and Nato forces in Afghanistan.

Gen Miller was not wounded but the regional intelligence agency commander was killed and the provincial governor severely wounded, crippling the leadership of one of the country’s most strategically important provinces.

Although nominally a provincial police chief, Gen Razeq was one of the most powerful political figures in Afghanistan and a formidable opponent of the Taliban, with unchallenged authority across the volatile south of the country.

The decision to suspend the vote was taken over the objections of some officials who warned that any delay would threaten the whole process and hand the Taliban a major propaganda victory.

Gen Miller himself gave a show of confidence on Friday, filming a television interview on the street outside the US embassy in Kabul and assuring Afghanistan of continued support.

“My message to the people of Afghanistan has been very consistent: you have every right to be proud of your security forces and the preparations that made for this election despite this unfortunate event, tragic event, down in Kandahar,” he said.

Saturday’s election had been seen as a major test of the government’s ability to organise a nationwide ballot ahead of the more important presidential election next April.

But the shock of Gen Razeq’s death meant the people of Kandahar were “morally not ready to vote”, Hafizullah Hashimi, spokesman of the Independent Election Commission, said.

The Taliban issued a fresh warning not to vote on Friday, telling people to stay at home and saying they would shut down roads and would be “closely monitoring all developments”.

The United Nations mission in Afghanistan (Unama) issued a statement of its own expressing concern at Taliban threats to attack schools and other buildings used as polling centres. “Unama urges the Taliban to respect and protect civilians and not to threaten them or carry out violence,” it said.

On top of mounting security concerns, the elections have been dogged by technical and organisational problems, notably around the use of untested biometric voter verification equipment rushed in after allegations of widespread voter fraud.

Thursday’s attack underlined how precarious the situation remains in Afghanistan after more than 17 years of war despite preliminary contacts between Taliban and US officials to find a basis for future peace talks.

US defence secretary Jim Mattis said it was too soon to say what effect Gen Razeq’s death would have but added that the US military’s mission was unaltered.

“We need to find who’s done this,” Mr Mattis told reporters travelling with him in the Southeast Asian city-state of Singapore. “But right now, we are going toward the election and we will continue to defend the Afghan people.”

He said the attack would not affect US military movements around Afghanistan or security arrangements for General Miller, who said he did not believe he was the target of the attack.

It was unclear how the attack would affect moves towards a peace process, following a meeting last week of Taliban officials and the US special envoy, Zalmay Khalilzad, but it complicates an already difficult situation.

“You’re going to start asking questions about, ‘Well, how trustworthy are they? What influence do they really have?’” said one former Defense Department official who left the Pentagon recently, referring to the Taliban.

“And you know the bottomline question is, ‘Why are we still dealing with them?’ or ‘Should we deal with them?’”

However Mr Mattis said the US aim of finding a negotiated political solution was unchanged. “We remain absolutely committed to an Afghan-led Afghan reconciliation,” he said.

Gen Miller, who knew Gen Razeq well from his previous tours of duty in Afghanistan, issued a statement saluting a “great friend”.

“Afghanistan lost a patriot,” he said on Twitter. “The good he did for Afghanistan and the Afghan people cannot be undone.”

A disarmingly youthful-looking figure, with a toothy smile belying a fearsome reputation, the 39-year-old Gen Razeq was regularly accused of building a fortune by extracting millions of dollars from traders and businesses. He was also accused of torturing prisoners and other abuses, which he denied.

He clashed frequently with President Ashraf Ghani, defying attempts to sack him, but was adept at navigating the region’s complex tribal politics and enjoyed popular support in Kandahar and the surrounding provinces.

He was also highly respected by US officers who saw his ruthless methods as the most effective weapon against the Taliban in both Kandahar and the wider south.

“Razeq was, kind of, the embodiment of security, not just in Kandahar. It is Uruzgan, it’s Zabul province,” said the recently retired Defense Department official. “He had a lot of sway over other senior officials and certainly in the police.” – Reuters