Economy sags in country with scant agriculture, tourism, energy and rule of law 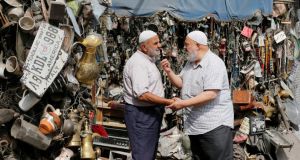 Elderly men talk to each other in downtown Amman. Photograph: Muhammad Hamed/Reuters

The taxi nuzzles gently into dense rush-hour traffic as car headlamps flicker over the walls of white stone villas and residential and office blocks.

High in the sky, flashing red lights atop tinted glass towers and skeletal cranes over unfinished blocks warn aircraft of their presence in the jagged skyline of Amman.

The city hosts dozens of five-star and lesser hotels, scores of universities and vocational centres, designer clothes shops, expensive restaurants, districts of elegant villas, ranks of multistorey apartments for the middle class and squalid neighbourhoods where the poor struggle to survive.

Amman has four million residents in a country of 10 million. When I first visited the city in 1961, Jordan was a modest country of one million surviving on meagre resources with a little help from its friends. I stayed with a university class- mate whose home was on the edge of the city. Milk was delivered each morning by a shepherd with a herd of goats.

There was one comfortable hotel, the old Philadelphia near the second century Roman amphitheatre. Clever students went to Egyptian or Lebanese universities; many young people emigrated. Today their remittances help keep Jordan afloat.

The ever-expanding, monumental white stone capital now weighs heavily on this small country with no natural resources, a growing population, and a public debt of 95 per cent of gross domestic product.

At the end of May, Jordanian unions called a one-day strike strike and thousands took to the streets to protest against tax increases and rises in fuel and electricity prices. The government fell and Omar Razzaz, a popular technocrat, was named prime minister.

He reversed price hikes but had no option but to keep an amended tax law mandated by the International Monetary Fund.

Razzaz and his staff mounted a campaign to explain the government’s tax policy but this failed to sway public opinion. A recent poll shows only 30 per cent of the public and 35 per cent of opinion makers believe Jordan is following a correct course. A cabinet reshuffle is expected. In a bid to boost his waning popularity, he has downsized and reshuffled his cabinet to meet popular demands to fight nepotism and corruption.

In his address to the opening session of parliament, King Abdullah strengthened the pledge of the new government by stating, “Jordanians have an equal right to justice and corruption will not be left unaddressed to become a chronic social illness.”

Over dinner at the home of friends, talk was dominated by the need to apply the “rule of law” to the privileged as well as others in order to deal with resentment over commercial corruption and tax-dodging by the wealthy.

By “they” he meant indebted, jobless and hard-pressed people; by “we,” the establishment which has failed to initiate reforms and collect taxes from the wealthy.

“They” are people who borrow from banks to buy homes, cars and smart phones. If they are public employees, banks collect money owed from their salaries every month, reducing amounts families have to spend, creating resentment.

On October 4th, a municipal employee in a provincial city died after setting himself alight to protest against cuts in bonuses on which some families depend to purchase essentials.

Rampant consumption combined with a feeling of entitlement among all classes has created a major crisis in Jordan. Once again its friends have come to the rescue. Saudi Arabia, Kuwait and the United Arab Emirates transferred $1 billion (€870 million) of a pledged $2.5 billion to the central bank to rescue the country’s currency.

Ex-minister of state for economic affairs Yousef Mansour says that since 2010 Jordan has suffered “a very, very long depression”. Its growth was below 3 per cent before the influx of Syrian refugees caused by that countries war, and was now at 2.2-2.3 per cent, he said.

“This is below the population growth rate. Some 1.2 million Syrian refugees have been a heavy burden on Jordan which already hosts two million Palestinian refugees dependent on the UN for services as well as hundreds of thousands of Iraqis, Egyptians, Yemenis and others,” he says.

Due to Jordan’s tribal and clan-based society, civil servants are often hired “on the basis of kinship rather than merit”, he adds.

About 57 per cent of the labour force comprises bureaucrats and pensioners who consume most of the budget. “There is no money to spend on schools, roads, healthcare or public transport. The government has to borrow money to pay salaries. The public refuses to admit its [entitlement/consumerist] mindset is unacceptable,” says Mansour.

“We cannot sustain this situation for [another] two or three years unless significant changes take place,” he states. The new government had allowed “protests across the country to prevent demonstrators from coming to Amman. Razzaz thought he had the street but he does not. The contract between the government and the people is like a bad marriage. There is no end in sight.”

Lawyer Anis Kassem argues, “Jordan has nothing. Agriculture and tourism are extremely limited. After the demise of Iraq [following the 2003 US occupation] Jordan no longer received cheap oil.” Energy prices were high, he added.

“There is talk about corruption but no one mentions who is responsible. Corruption is a luxury we cannot afford. Corruption is undermining the fabric of the society. There is strong opposition to the income tax law. People say, ‘Before you tax us, collect the money [the wealthy] took away’.

“Money coming in is in soft loans which should be invested in productive activities but is not. Construction of high-rise office buildings continues although many have 10 per cent occupancy. The public sector was privatised to pay back the national debt, but the debt increased.

“No one has come up with a plan for Jordan’s salvation.”