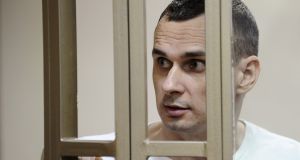 Ukrainian film director Oleh Sentsov won the EU’s prestigious Sakharov Prize for Freedom of Thought on Thursday, raising hopes in his homeland and abroad that it could help secure his release from a Russian prison.

Mr Sentsov was sentenced to 20 years in jail by a Russian military court in 2015, for allegedly plotting terror attacks in retaliation for Moscow’s annexation of his native Crimea the previous year.

Western governments and international rights groups have denounced the “show trial”, noting that Mr Sentsov was convicted even though the key prosecution witness said he had testified against him under duress.

Earlier this month, Mr Sentsov (42) ended a 145-day hunger strike inside the “Polar Bear” prison at Labytnangi inside the Arctic Circle, without succeeding in his aim of forcing Moscow to release 64 Ukrainians whom he calls political prisoners; he said he stopped the protest to avoid being force fed by the Russian authorities.

“Through his courage and determination, by putting his life in danger, the filmmaker Oleh Sentsov has become a symbol of the struggle for the release of political prisoners held in Russia and around the world,” European Parliament president Antonio Tajani told the assembly in Strasbourg.

Donald Tusk, president of the European Council, congratulated Mr Sentsov and reiterated his “call on Moscow to free Sentsov and all other political prisoners following Russia’s illegal annexation of Crimea.”

Mr Sentsov’s lawyer Dmitry Dinze said it may be some time before his client heard that he had won the prize, which is named after dissident Soviet physicist Andrei Sakharov and counts the late Nelson Mandela among past winners.

“For the moment nothing is happening,” regarding Mr Sentsov’s possible release, the lawyer told Radio Free Europe.

“It’s as if they walled him up. Maybe this prize will help to somehow shake this wall and in some way destroy it,” he added.

Ukrainian president Petro Poroshenko said he was “convinced that this decision of the European Parliament will bring the moment of Oleh Sentsov’s release closer.”

“This is recognition of the courage and resilience of Oleh, an example of the struggle for justice, dignity, European values and human rights for the whole world . . . despite the inhumane repression and tortures of the Kremlin regime”.

Ukraine’s prime minister, Volodymyr Groysman, said he believed the Sakharov Prize was “another turn of the key to unlock the prison that holds Oleh”.

In another move warmly welcomed by Kiev, the European Parliament approved a resolution to tighten sanctions on Russia if it continued to fuel rising tension in the Sea of Azov, which it shares with Ukraine.

In recent months, Russian border guards have stopped and searched hundreds of commercial ships travelling to or from Ukrainian ports, in what Kiev calls a bid by Moscow to effectively blockade the sea.