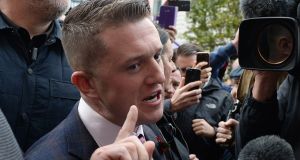 Activist Tommy Robinson has had his official Facebook page and Instagram profile removed because he has posted “in ways that violate our policies around organised hate”, according to the social network.

Robinson, whose real name is Stephen Yaxley-Lennon, had amassed more than one million followers on Facebook, where he regular posts live videos and appeals for donations.

Robinson said he had not heard of his ban from Facebook, claiming the “corrupt media and the establishment” were trying “to silence any opposition to their globalist plans”.

He added: “When putting me in prison and trying to kill me hasn’t worked, when then trying to get mainstream documentaries to destroy my name with false allegations, that hasn’t worked. Now, the establishment, which has gone for the plan of completely removing me from the public sphere – people will fight against this censorship, people will not like this censorship.

“You’re not just censoring me, you’re censoring the public’s option of listening to what I have to say. This is a complete attack on free speech which is going on across the world.”

A spokesman for Momentum, the grassroots movement supportive of Jeremy Corbyn and the Labour Party, said: “Hate speech isn’t free speech and spreading racist lies shouldn’t be tolerated on our shared digital platforms.”

Emails and tweets from Tommy Robinson were used as evidence in the trial of Darren Osborne, who was convicted of murder for driving a van into worshippers outside two mosques in London, to show his path of “radicalisation” before committing the attack in June 2017.

Mohammed Shafiq, chief executive of the Ramadhan Foundation who has campaigned against grooming gangs in Rochdale from within the Pakistani community, said he welcomed the ban and claimed he had met with Facebook representatives to “discuss the concern of the British Muslim community that Tommy Robinson’s continued presence on social media was leading to further radicalisation of his supporters”.

“This is not about free speech or silencing criticism or questioning of Islam and Muslims, this is about hate speech and hatred towards one community,” Mr Shafiq said, adding that he had contacted Google and YouTube to urge them to take similar action.

YouTube is home to Mr Robinson’s last remaining official profile on a mainstream social network, where he has nearly 300,000 subscribers.

He was banned from Twitter in March 2018 and removed from PayPal in November.

The ex-English Defence League leader’s support boomed in 2018 after he was jailed for contempt of court for filming outside the trial of men later convicted of sexual abuse which was the subject of reporting restrictions.

Far-right groups from around the world rallied around Mr Robinson’s cause, funding and organising rallies plagued by violence and describing his imprisonment as an issue of free speech.

He was released on procedural grounds in August and his case was referred to the attorney-general for review in October before he was named an adviser to Ukip one month later.

Ukip leader Gerard Batten said Mr Robinson’s page was shut down for “BS reasons” and called for his Twitter followers to join the party.