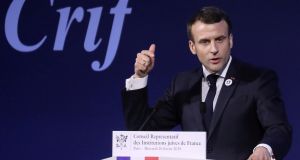 Mr Macron told Jewish leaders on Wednesday that the government would broaden France’s definition of anti-Semitism to include anti-Zionism – the rejection of Israel’s right to exist. He also said his government would ban three neo-Nazi and extreme-right groups and frame a new law against hate speech on the internet.

“For several years – and the situation has worsened further in the past few weeks – our country, like Europe as a whole and almost all western democracies, is faced with a resurgence of anti-Semitism not seen since the second World War,” Mr Macron told the annual dinner of the Representative Council of French Jewish Institutions (Crif).

Mr Macron said France would adopt the working definition of anti-Semitism used by the International Holocaust Remembrance Alliance, which includes “denying the Jewish people their right to self-determination” and calling the state of Israel “a racist endeavour”.

But he noted that the change did not mean amending French law or stifling criticism of Israeli policies. The idea, he said, was to guide the police, the courts and the country’s teachers so that they could counter “those who conceal, behind their criticism of Israel, the rejection of the very existence of Israel – the most primal form of anti-Jewish hatred”.

Mr Macron also announced that the government would act to dissolve racist and anti-Semitic groups in France, starting with Bastion Social, Blood and Honour Hexagone and Combat 18 – groups he said fuelled hate and discrimination.

The president said that Laëtitia Avia, a member of parliament for his governing La République en Marche party, will in May introduce a draft law aimed at combating racism and anti-Semitism on the internet.

“It’s a very important announcement for all the Jews of Europe. We were waiting for this from France,” Raya Kalenova, chief executive of the European Jewish Congress, said after hearing Mr Macron, noting that other European countries including Germany had already changed their definitions of anti-Semitism. “It was for me a historic speech.”

Anti-Semitism has jumped to the top of the political agenda in France in recent days after marchers in an anti-government gilets jaunes (yellow vests) demonstration in Paris were seen insulting and taunting the writer Alain Finkielkraut as a “big Zionist s**t” and shouting at him to “go back to Tel Aviv”.

At least some of the perpetrators appeared to be Islamists – media reports said one of the abusers was a Salafist known to the police – but Jewish leaders say there is rising anti-Semitism across the political spectrum, from the far right to the far left.

On Tuesday, Mr Macron visited the Holocaust Memorial in Paris and a Jewish cemetery in eastern France, where swastikas and slogans in German were found daubed on more than 80 tombstones.

That evening, an estimated 20,000 people, led by Edouard Philippe, the prime minister, and former French presidents and politicians, gathered in the Place de la République in Paris in a demonstration against anti-Semitism.

“We are here because we are ashamed,” said Jany de Chambrun, a demonstrator, referring to the Alain Finkielkraut incident. “We are disgusted.”

Elisso Taly, a doctor, said anti-Semitism had always been a latent problem in France but was re-emerging with demonstrators such as the gilets jaunes. “With these movements, there are a lot of frustrations coming out.”

The European Jewish Congress said this week that it supported discussions in the French parliament about the possibility of criminalising anti-Zionism as a form of anti-Semitism – although Mr Macron himself has said he does not favour legislation.

Moshe Kantor, European Court of Justice president, said it was clear “the overwhelming majority of those who claim to be anti-Zionist use it merely as a cover for their anti-Semitism”. – Copyright The Financial Times Limited 2019