Fintan O'Toole: Irexit would be the end of Irish nationalism 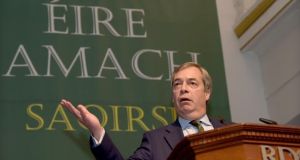 What Europhile quisling said this: “Ireland belongs to Europe by history, tradition and sentiment no less than by geography. Our destiny is bound up with that of Europe . . . Our people have always tended to look to Europe for inspiration, guidance and encouragement”?

That was Seán Lemass, who fought in the 1916 Rising as a boy, took the anti-Treaty side in the Civil War, built Fianna Fáil and could never be thought of as anything other than an Irish nationalist. He was speaking in Brussels in January 1962 on Ireland’s hopes of joining what was then the European Economic Community. He stressed that he fully understood that Ireland was seeking to be part of a project that was about much more than economics and that he spoke “in full awareness” of the EEC’s underlying aim of “ever-closer union”.

For all the fantasies of Nigel Farage and John Waters, Ireland will not follow the UK out of the European Union. It won’t do it for reasons that Farage and his new-found Irish acolytes fail to fathom but that Lemass fully understood. Brexit is an authentic English nationalist revolution, even if it depends on a ludicrous notion of the EU as England’s imperial oppressor. Irexit would not be an Irish nationalist revolution. On the contrary, it would be the end of Irish nationalism. The logic of Irexit would be for Ireland to rejoin the UK – and that’s why it hasn’t a hope.

If we were to be brutal about it and strip away all the undoubted psychological satisfactions of nationhood, Irish independence was largely notional until we joined the EEC in 1973. In some ways, Ireland was rather like what Britain could yet become after Brexit – a satellite state. We were no longer represented at Westminster but we played largely by British rules. There were grand moments of national self-assertion (most obviously Irish neutrality during the second World War) but day-to-day realities, as Lemass understood, were the realities of dependency. Our people continued to emigrate to British cities. Our economy was a British backwater.

Usefully, Brexit has reminded us of that stratum of English political life in which it is still perfectly okay – indeed compulsory – to treat Ireland with an arrogance undiminished by absolute ignorance

In one sense, of course, these figures mean nothing. They belong to a rational discourse of economic self-interest and Brexit has reminded us that self-interest may be neither here nor there in nationalist revolutions. The areas of England that will suffer the greatest economic hardship as a result of Brexit are also the areas most in favour of it. The pain of self-harm can be assuaged by the pleasures of self-righteousness. In principle at least the same could be true of Ireland – it is possible to imagine that we might get a masochistic thrill from shooting ourselves in one foot while trying to dance an authentically Irish jig with the other.

But there is an enormous difference in this regard between England and Ireland. England has thrown off an imaginary oppressor – we’ve had a real one. England has no idea what actual dependency feels like. It imagines that it is a vague feeling of irritation, a cranky seething at “red tape” and “interference”.

We know what dependency is really like. It’s not Brussels sending you a big cheque and telling you not to spread slurry on your fields in return. It’s not a nice man from Poland coming to install your bathroom or a Latvian woman who speaks five languages coming to work for an American multinational that wouldn’t even be in your city if it couldn’t recruit people like her. It’s having to exist at the whim of foreign people, some of them jolly decent chaps and some of them cynical creeps like Farage.

Usefully, Brexit has reminded us of that stratum of English political life in which it is still perfectly okay – indeed compulsory – to treat Ireland with an arrogance undiminished by absolute ignorance. The rage at Irish impertinence in insisting on guarantees about the Border and the Belfast Agreement was expressed by Tory MPs who talked airily about “the Taoiseach of Northern Ireland Edna Kelly”.

The EU has deep problems but most Irish people will always prefer to take their chances with it rather than going back into the orbit of an England that does not even exert the gravitational pull of an imperial power.

There is something irredeemably ridiculous about a notion of Irish independence that consists of mimicking the craziest contortions of Ireland’s former masters. All our mammies had the answer to it years ago. “Why did you do that?” “Because my friend did it first.” “And if your friend jumped off a cliff, would you do that too?” Even as a little kid, you’d have to be an awful eejit to say “Yes, Mammy.”

1 Michael J Fox: ‘In the wheelchair, I’m luggage. No one listens to luggage’
2 The Crown’s Josh O’Connor: ‘I’m a republican. I’m not interested in the royal family’
3 School leggings controversy: Anatomy of a social media firestorm
4 Miriam Lord: Dramatic Al sets the stage for a dark day of reckoning
5 Publican blames Covid-19 as Dublin’s Dice Bar to shut for good
Real news has value SUBSCRIBE