Irexit: Could it be Ireland’s next big political movement? 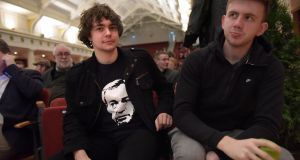 Flames of populism may have ignited the political infernos of Donald Trump and Brexit in 2016 and sparked growing Euroscepticism across Europe, but in Ireland there has been little heat seen on the conservative hard right.

That is until now. Last weekend, a group of 600 people, drawn to an appearance by leading Brexit flame-fanner Nigel Farage in Dublin, showed that there is some public appetite for an exit from the EU like the British, or at least that more questions be asked about the direction the EU is heading in.

While polls have consistently shown that there is little hope of any political movement towards “Irexit” succeeding, there is a recognition within the mainstream parties that the demand for such a movement is grounded in legitimate concerns, and that some feel frustrated that the political status quo is not working.

The appearance of the mostly male crowd for the speech by Farage, the former Ukip leader, at the Irexit: Freedom to Prosper conference at the RDS last weekend has stirred debate about whether an Irish brand of Trumpism or Brexiteerism could gain a foothold here.

Two days after the conference, Tánaiste and Minister for Foreign Affairs Simon Coveney, whose department leads the Irish Brexit talks, tweeted the results of the most recent RedC poll commissioned by the European Movement Ireland NGO to show “why Ireland will not be following the UK out of the EU”.

“Support for the EU stronger than ever in Ireland,” he posted on Twitter, along with a graph showing that 87 per cent of people surveyed for the poll believed that the State had on balance benefited from being a member of the EU.

The poll, which was released in April 2017, also found that just 16 per cent of people believed the Republic should follow the UK out of the EU.

James Charity, a Galway county councillor and barrister who spoke at the conference, said that he has since been inundated with emails and calls about the prospect of an Irexit political party being formed.

He sees the emergence of a Eurosceptic movement as “imperative to act as a counterbalance to the consensus”, if only as a vehicle to achieving reforms in EU policy. Without reform, anti-EU sentiment will only continue to rise, he says.

He rejected poll data showing support for the EU, saying that it doesn’t capture an underlying unease about where the EU is heading.

“It is not a million years ago since the Lisbon Treaty. You only have to look at the two referendums that were rejected to see that it is not a fringe movement,” he said.

Charity believes the driving force for an Irexit party to contest the 2019 European elections stems from outside Dublin and people who believe a “two-tier recovery” has left them and other regions behind. This is similar to the rural vote that drove support for Trump and Brexit.

“It wasn’t just a local crowd within the confines of Dublin [at the Irexit conference]. It was something much larger,” he said.

The frustration that was in that room, there was a basis for a cohesive political movement, but it does need direction and leadership

If there was an unified political movement in the aggrieved, anti-establishment audience at the conference, the glue was in the shared anger directed towards the EU as an institution and a common view that they are being left behind by their political parties and that their voices are not being heard in public debate.

But there were also disconnects between the disparate elements in attendance, with many holding divergent views, particularly on immigration.

“The frustration that was in that room, there was a basis for a cohesive political movement, but it does need direction and leadership,” said Charity.

The disgruntlement that could form the seeds of a movement was certainly evident among the Irexit crowd at the RDS.

Fianna Fáil’s Brexit spokesman Stephen Donnelly points to the risks from uneven asset distribution, declining home ownership rates and the rising age of first-time buyers as symptoms of a wider socioeconomic malaise, particularly among younger people, who were strongly represented at the Irexit conference.

“I don’t think we need to take Irexit seriously but we absolutely need to take seriously the fact that too many people are being disenfranchised by the current direction of the country,” he said.

The latest Irish Times/Ipsos MRBI opinion poll, published late last month, showed that 34 per cent of people believe the country is going in the wrong direction.

“We have to take them deadly serious. We would be very foolish to think that it won’t happen here,” said Donnelly. He did not know what the “it” might entail in Ireland, but he did not believe it would be Irexit, which he describes as “preposterous, ill-considered, disingenuous and irresponsible”.

Minister of State for European Affairs Helen McEntee sees the Government’s “citizens’ dialogue” events on the future of Europe as opportunities to re-enfranchise the anti-EU faction and as a forum where they can air their grievances and make proposals for change, particularly amid concerns over our closest ally, the UK, exiting the bloc.

“If people obviously have a difficulty with the direction we are going in, now is the time to try and shape it, and try and be part of it, and try to say what they need to say,” she said, speaking by phone on her way to Galway on Thursday for the first of five regional meetings on the future of Europe.

She hopes that the Government’s negotiations to avoid a hard Border post-Brexit will show those who question the loss of sovereignty to Europe that Ireland has influence in the union.

“[It] shows that we do have a voice and our voice is just as powerful as anybody else’s,” she said.

The strength of the radical left . . . has colonised the anti-establishment sentiment and taken it in a more progressive direction

While much of the anti-EU anger under the post-crash austerity policies of the Troika grew support for parties on the left, even they worry about the risk from a rising right and Farage-led talk of Irexit.

“We have been lucky in Ireland that . . . far-right or racist politics has not taken an organised form,” said People Before Profit TD Richard Boyd Barrett.

“The strength of the radical left . . . has colonised the anti-establishment sentiment and taken it in a more progressive direction, but I don’t think for a minute that we are immune from the potential [rise of far-right politics],” he said.

Sinn Féin, the nationalist party that might once have been a natural home for anti-EU voters, believes the best way to address concerns about the EU is to reform from within by finding common cause with “like-minded people with a more progressive agenda”, said the party’s Brexit spokesman, David Cullinane.

“I don’t think there is the space or appetite in Ireland for a mainstream party like Ukip emerging simply because they have left Britain in a very bad and dangerous place,” said Cullinane.

A former Department of Foreign Affairs colleague of Ray Bassett, the one-time Irish ambassador to Canada who has said Irexit needs to be considered in a bad Brexit, believes the idea is off the table. “I don’t think they [Irexit supporters] even qualify as a minority; they are more of a cult there are so few of them,” said the official.

Ben Tonra, professor of international relations at UCD, who teaches about the populism that drove Trump and Brexit, divides Irexiteers into people who want to “give the system a good kicking or to tear it down”. They require a “lightning bolt” idea or personality to light such a movement and that is why Irexit and Farage – a man who brings “some stardust” given his success in the UK – are attractive, says Tonra.

“Irexit is a pretty sad, weak lightning bolt; it is more like a lighting bug, but in the darkness of these people’s lives, it is the only bright thing they can cling on to,” he said.

“It is a shimmering thing that promises success.”