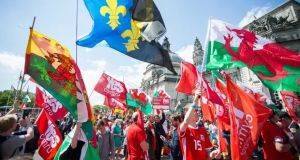 Marchers in Cardiff on Saturday calling for an independent Wales. Photograph: Rex/Shutterstock

Thousands of people demonstrated in Cardiff on Saturday calling for an independent Wales in what organisers said was the first such march in Welsh history.

As the march ended with a rendition of the Welsh national anthem, Hen Wlad Fy Nhadau, Adam Price, leader of nationalist party Plaid Cymru, said Welsh problems could be more easily solved if decisions were taken by the nation. “For many years, our desire to see an independent Wales has seemed distant. But the tide is turning, the marches are growing, and the voices are louder,” he said.

‘Not fit to govern’

“Decades of Westminster neglect have resulted in poverty and under-investment. A third of our children are living in relative poverty and you only have to look at the Brexit chaos to see that Westminster is not fit to govern or represent Wales.”

Michelle Thomas Llywelyn ap Gwilym, a spokesperson for organiser All Under One Banner Cymru, told WalesOnline: “The debate around Wales’s constitutional future has intensified since the vote for the UK to leave the European Union.

“Several groups believe that Wales and its people would have a better future as an independent nation outside the UK ... There is an increasing realisation that independence is normal.” – Guardian service