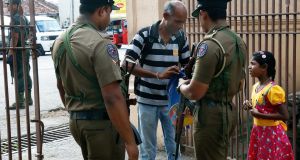 Sri Lankan Security personnel check people before they enter the church as services resume again after the Easter Sunday attacks, at the âAll Saints™ Church in Colombo. Photograph: Pushpa Kumara/EPA

Catholics in the Sri Lankan cities of Colombo and Negombo, where churches were struck by suicide bombers on Easter Sunday, have held their first Sunday morning masses since the attacks that killed more than 250 people.

Police stood guard at every entrance to St Lucia’s cathedral in Colombo, one of the country’s largest churches, which was full of worshippers, including many who had lost relatives in the bombings on April 21st claimed by Islamic State.

Those attending passed through full-body searches and were banned from bringing bags, and the road outside was barricaded and guarded by armed soldiers. Troops wearing masks and camouflage patrolled the surrounding area on motorbikes.

Eight-year-old Joshua Berney found it too much, and left partway through the mass. He lost an aunt, an uncle and three cousins in Colombo’s St Anthony’s church, including one who was his best friend.

“We still haven’t found his body, so it’s difficult,” his mother, BJ, said. “My son finds it tough.”

At Colombo’s Mother of Seven Sorrows Mater Dolorosa church, two streets way from St Anthony’s, devotees trickled in until the building was full. Wall-mounted fans whirred at capacity to beat back the intense humidity.

“The parishioners were really upset that we didn’t have a mass the last two weeks,” said Fr Anthony Fernando Marcelliar, who led the service. He held a private mass last Sunday, which about 50 people heard about and attended.

“Others found out later that there was a mass and they couldn’t come and they were really upset - they even scolded me,” Fr Marcelliar said.

More than a dozen children in the congregation were having counselling, he added. “One mother told me yesterday that her son of eight years get excited even by the slightest noise and doesn’t sleep well at night.”

Stephan Fernando (16), was apprehensive as he entered the mass. He was serving as an altar boy at St Anthony’s when a suicide bomber detonated himself inside. “I feel better now that I’ve received communion,” he said after the service.

His brother, Eugine, who was also serving the altar that Sunday, had decided to stay home, and had been avoiding public places.

“My children are okay, but [THE VICTIMS] were also someone’s children who were loved and cared for,” said Stephan and Eugine’s mother, Sharmila, in tears.

“I saw how my sons’ shirts were splattered with the flesh and blood of others when they were coming out. I didn’t see the church but I could understand how bad the damage was.”

Sunday’s masses in the two cities - services elsewhere in the country had restarted earlier - were small steps towards the resumption of normal life after the attacks that ended a decade of relative peace following the government’s brutal victory in the country’s 27-year civil war against Tamil militants.

Catholic private schools, which have been shut since the attacks, are likely to re-open on Tuesday.

A heavy police and army presence is still visible in major cities and villages as security forces continue the hunt for accomplices of the terror cell that executed the bombings.

The president of Sri Lanka, Maithripala Sirisena, told parliament this week that most of the 150 people suspected to have been linked to the plot have died or been arrested. He said 56 had been arrested on suspicion of direct involvement in the plot, of which 12 were hardcore terrorists.

The precise involvement of Islamic State, also known as Isis, in the attacks is not clear. Sirisena said police had so far discovered 13 safe-houses, 41 bank accounts and 19 vehicles and motorcycles belonging to the bombers. Those who had aided the terrorists had been paid cash rewards of up to 2 million rupees (€10,000, he added.–Guardian