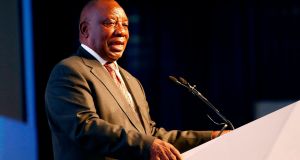 Cyril Ramaphosa: the ANC may have been saved from losing its majority only by his rise as president after he unseated Jacob Zuma last year. Photograph: Phill Magakoe/AFP/Getty Images

The African National Congress of South Africa’s president Cyril Ramaphosa won national elections with 57.5 per cent of the vote, its lowest ever parliamentary majority, according to official results.

Mr Ramaphosa said “our people have spoken – and they have done so clearly and emphatically” after the ANC’s victory in this week’s poll was announced on Saturday.

The result bears the scars of a decade of corruption and economic mismanagement in the party that has governed Africa’s most industrial nation since 1994.

The party may have been saved from losing its majority only by Mr Ramaphosa’s rise as president after he unseated the scandal-hit Jacob Zuma last year with a pledge to root out graft and bring a “new dawn”.

The ANC’s victory is a drop of over four percentage points on its performance in 2014’s last national election, and far from its glory days in the first decade of its 25-year rule. Its majority in parliament will sink 19 seats, to 230 out of 400.

Amid the voter revolt and a marked drop in turnout, in concurrent provincial elections the ANC also retained control of Gauteng, the industrial centre and most populous region, by the thinnest of margins.

But the party’s share was higher than its disastrous slide to 54 per cent of the vote in 2016 local polls under Mr Zuma that took away control of major cities such as the business capital, Johannesburg.

Analysts credit Mr Ramaphosa, whose personal approval ratings were far higher than his party’s, for the turnround.

Many in business hoped for a strong majority for the ANC of over 60 per cent, to power reforms promised by Mr Ramaphosa, a unionist turned tycoon.

They hope he will overcome resistance from Mr Zuma’s leftover cronies in the ruling party and deliver a reckoning for graft in particular.

But in a reflection of the infighting over Mr Zuma’s legacy, ANC politicians have already squabbled about whether Mr Ramaphosa saved the party from defeat.

Fikile Mbalula, the head of the ANC’s election campaign, said its share of the vote would have collapsed to 40 per cent without him.

Ace Magashule, an ally of Mr Zuma who occupies a powerful position as the ANC secretary general, denied that the president had carried the party and said that “it is not about any individual”.

Despite the ANC’s disarray, the liberal main opposition, the Democratic Alliance, failed to make headway and lost seats versus 2014, with a share of less than 21 per cent of the vote.

But there was a breakthrough for the Economic Freedom Fighters, a populist breakaway from the ANC led by Julius Malema.

The party, which advocates the radical nationalisation of mines and land, won just over 10 per cent and increased its seats in parliament from 25 to 44.

South Africa’s parliament chooses the president and Mr Ramaphosa will be re-elected when the new assembly sits.

Mr Ramaphosa made a high-profile pledge before the vote to bar the corrupt in his party from official positions. The ANC’s list of candidates for the new parliament includes allies of Mr Zuma who face allegations of perjury and other wrongdoing.

The president’s first big post-election test will be an expected cabinet reshuffle that analysts say may also cut the number of ministers.

1 Ireland’s official coronavirus death toll likely to have been overstated, report finds
2 Bobby Storey: The IRA's planner and enforcer who stayed in the shadows
3 The abrupt end to Brexit talks is not only surprising but perplexing
4 Dara Murphy leaves EU job after just seven months
5 Armed gardaí called as men with machete attack cars belonging to soccer team
Real news has value SUBSCRIBE