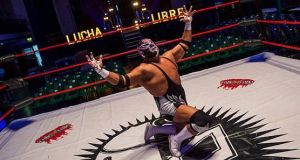 Cesar Barron, known as Silver King, was performing in the Greatest Show of Lucha Libre at Camden’s Roundhouse on Saturday when he collapsed. Photograph: Getty

A wrestler and Hollywood star has died after collapsing during a show in London.

Silver King, who played the villain in film Nacho Libre alongside Jack Black, was performing at the Roundhouse in Camden on Saturday night when he collapsed.

The wrestler, real name Cesar Barron, is said to have died from a heart attack in the ring while facing Juventud Guerrera, or Youth Warrior, according to Mexican outlet Record.

Footage posted by the Lucha Azteca AAA shows Juventud Guerrera appearing to kick Silver King in the side before turning him over to “pin” him for the victory.

After the victor celebrates, fellow wrestlers come to the aid of the stricken fighter.

Scotland Yard said police are treating his death as “non-suspicious”.

The London Ambulance Service (LAS) said medics arrived five minutes after being called at 10.21pm, but the patient was pronounced dead at the scene.

Fight attendee Roberto Carrera Maldonado said the wrestler’s condition initially appeared “staged” as part of the event, before efforts were made to revive him.

“All of us were really shocked - it wasn’t clear what was happening,” Mr Carrera told the BBC. “I had the impression they didn’t know what to do.”

The Roundhouse said on Sunday morning that the circumstances of the wrestler’s death are being investigated.

The Health and Safety Executive said an investigation would be in the remit of the local authority, but Camden Council has been unable to comment.

The tweet read: “Lucha Libre AAA Worldwide joins the grief that the Luchistica family has for the death of Cesar Cuauhtemoc Gonzalez Barron ”Silver King“.”

Barron was the son of another Lucha wrestler Dr Wagner. His brother Dr Wagner Junior also competed as a wrestler.

He paid tribute to his brother online, changing his Twitter profile to an image of a black ribbon.

Silver King competed in the World Championship Wrestling between 1997 and 2000, taking on Juventud Guerrera for the Cruiserweight Championship in 1998.

Fellow wrestlers paid tribute, calling him “one of the greats”.

WWE said on Twitter it was saddened to learn of the 51-year-old’s death. - PA