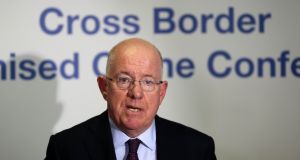 Minister for Justice Charlie Flanagan has said the best way to avoid a hard Border after Brexit would be for Northern Ireland to remain in the EU customs union.

Speaking in London, he said the Government had contingency plans for all eventualities, from the softest Brexit to the hardest.

Commenting on Britain’s proposal for a transition period after Brexit, Mr Flanagan warned that two years was too short a time to allow businesses and citizens to prepare for the impact of Britain leaving the European Union.

Earlier on Wednesday, MPs heard that a hard Border with physical infrastructure and spot checks on vehicles is inevitable if Britain leaves the customs union.

Paul Mac Flynn, senior economist at the Nevin Economic Research Institute, told the Northern Ireland Affairs Committee at Westminster that Britain faced a clear choice about the Border. “Leaving the customs union is a perfectly legitimate aim if the UK wants to pursue an independent trade policy. That’s fine, but then don’t turn around when you get to the land border in Ireland and say, where are the flexible solutions?” he said.

“I think it has to come down to this. If you are leaving the customs union, that has an implication for what the Border in Northern Ireland is going to look like. It’s clear that one is being sacrificed for the other, at least be honest about it.”

Theresa May repeated in the House of Commons on Wednesday that Britain will leave the customs union and the single market when it leaves the EU.

In her speech in Florence last month, the prime minister ruled out any “physical infrastructure” on the Border. But Sylvia de Mars, a lecturer in EU law at Newcastle Law School, told the committee that such a claim was misleading.

“We’re going to have infrastructure. It does not necessarily have to be at the Border but there will have to be, for instance, depots where things are checked, where spot checks can take place to make sure that all the products that are crossing the Border meet the EU’s internal regulatory standards,” she said.

Mr Mac Flynn said that, although technology could streamline customs clearance procedures, it could not eliminate the need for checks.

“It’s like when people say we’re going to have electronic customs declarations and that’s going to remove a lot of bureaucracy for businesses. That’s fine. But borders are there for the people who are not filling in the forms,” he said.

He pointed out that, although advanced technology is used on the border between Norway and Sweden, officials still make spot checks to ensure that electronic customs declarations are accurate. And he said the current regime on excise at the Irish Border was seriously inadequate.