Lord Bates, a minister in the British government, offered his resignation for being absent from the House of Lords when he should have been there to answer questions on his brief. Video: British Parliament TV 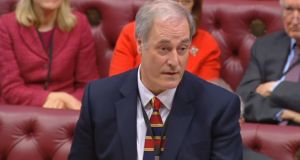 Lord Michael Bates dramatically offers his resignation at the despatch box at the House of Lords. Photograph: PA Wire

Lord Bates told peers he was “offering his resignation” to Ms May after saying he was “thoroughly ashamed for failing to be in his place to respond to a question from a peer”.

Ms May is on a trade visit to China but No 10 said his resignation had been refused.

Cries of “no!” could be heard in the chamber as Lord Bates announced his departure from the front bench.

He walked out the chamber after making his remarks from the despatch box during oral questions.

Lord Bates had been listed to respond to a question from Labour peer Baroness Lister of Burtersett.

He said: “With the leave of the house I wonder if you would permit me to offer my sincere apologies to Baroness Lister for my discourtesy for not being in my place to answer her question on a very important matter at the beginning of questions.

“I am thoroughly ashamed at not being in my place, I therefore shall be offering my resignation.”

Opposition leader in the House of Lords, Baroness Smith of Basildon, sought to reassure the peer after his departure, saying: “An apology is sufficient for a minor discourtesy.”

A spokesman for Downing Street said: “With typical sincerity, Lord Bates today offered to tender his resignation after missing the start of an Oral Questions session in the House of Lords, but his resignation was refused as it was judged this was unnecessary.

“As a hard-working and diligent minister, it is typical of his approach that he takes his responsibilities to parliament so seriously. He has received support from across the house and we are pleased that he has decided to continue in his important roles at the department for international development and HM Treasury.”

Lord John Taylor had clearly been caught off guard at having to respond to questions from peers in the absence of Lord Bates at the start of proceedings.

While attempting to respond to questions, it was obvious to onlookers he was ill-prepared leaving some peers looking baffled with his answers.

Lord Bates returned to government back in October 2016, after quitting as home office minister earlier that year to take part in a charity trek across South America. He walked more than 3,000km from Buenos Aires to Rio de Janeiro raising more than £260,000 (€297,000) for children’s charity Unicef. – PA