AfD politician under fire for converting to Islam 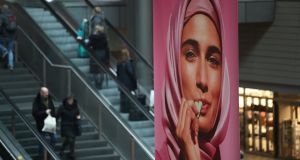 An ad for vegetarian sweets features a Muslim woman in a headscarf at Hauptbahnhof railway station in Berlin. Photograph: Sean Gallup/Getty Images

When German man Arthur Wagner announced on Facebook he had converted to Islam and was now called Ahmad, he was bombarded with abuse.

“Someone wrote, I should leave Germany immediately before I started building bombs,” said Mr Wagner from Potsdam, near Berlin, to the Bild tabloid.

The crucial detail: until recently Mr Wagner was a board member of the far-right Alternative für Deutschland (AfD) in the eastern state of Brandenburg.

The AfD was founded in 2013 as an anti-bailout party but has boosted its support since the refugee crisis with warnings of an “Islamisation” of Germany.

AfD head in Brandenburg Andreas Kalbitz, for instance, insists that “Islam does not belong to Germany”. And, if he has his way, Arthur “Ahmad” Wagner will soon no longer belong to the AfD.

Mr Wagner’s interest in Islam arose from personal contacts with Muslims in Germany, and during a recent trip to Russia. “My experience of Muslims has been that they are open and honest people,” said Mr Wagner, who grew up in the Soviet Union.

Until he was 20, he said, he was a card-carrying member of the Russian Communist Party. During a visit to Dresden in 1989, he was baptised. After moving to Germany he became an active member of his local Lutheran church community but found it increasingly difficult.

“Reasons include its position to the AfD, marriage equality and pastors taking part in gay pride parades with children,” he said. “It’s just not on.”

Last October, a month after the AfD entered the Bundestag, the Brandenburg state official converted to Islam. In January he stood down from the Brandenburg AfD board “for personal reasons”.

His party colleagues say they are shocked and disappointed by the news.

“I learned he was a Muslim from the newspaper,” Kai Berger, a local AfD official, told Bild. “Many members now expect him to leave the AfD, we cannot throw him out.”

Even if he isn’t welcome, Ahmad Wagner says he is determined to stay in his party, calling himself a “national conservative until I die”.

“I cannot be any different: there is a German spirit, a German soul and almost every AfD member has it,” he said. “And if we don’t protect this German soul, this Germanness in the coming years, then it’s gone and, with it, Germany.”

For now, Mr Wagner sees no contradiction between his political and religious beliefs. “I will study Islam and build bridges between Germans and Muslims,” said the 48 year-old German Muslim.