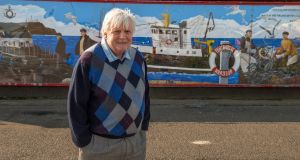 Dick James, who leads the 170-plus fishermen plying their trade every day from the ports of Ardglass, Kilkeel and Portavogie into the waters around Northern Ireland, is a happy man.

Following Wednesday’s triggering of article 50, he believes the United Kingdom’s departure from the European Union will bring larger quotas and a fall in the red tape with which the industry has had to cope.

“It’s a day we have been looking forward to for a long, long time,” says the 72-year-old chief executive of the Northern Ireland Fish Producers’ Organisation, who argues that the EU’s Common Fisheries Policy (CFP) “usurped” the UK’s control of its waters 200 miles out to sea.

Northern Ireland fishermen should have three-quarters of the fish stocks in the Irish Sea, but they ended up with “less than 45 per cent”, says the Gloucestershire native who has been living in Ardglass since the 1980s.

The records that are used to run the CFP mean that French, Belgian, Dutch and other European fishermen have quotas for stretches of sea in which they never operate, he adds, which means that nobody else can use them either.

“So it is a basic waste of quota,”James says.

British prime minister Theresa May’s triggering of article 50 and the decision to quit the London Convention of 1964 – which allows 12 European states to fish within six to 12 nautical miles of the UK coastline – will be “the start” of bringing waters “back to the sovereign state”.

“Constraints on quotas resulted in a decline in the fleet. There will be more fish to catch. We will get bigger quotas,” says James, who believes that 3 per cent international tariffs on fish exports “shouldn’t really hurt us that much”.

“Generally speaking, the supply of fish does not meet the demand for it, so if you have a case where demand exceeds supply you are generally in a good position as far as price goes,” he adds, going on to say that Northern Ireland’s 1,200 fishermen contribute £80 million (€93 million) a year to the local economy.

By and large, Northern Ireland’s fishermen supported Brexit because of annoyance about EU regulations, though James says that fishermen who did vote to remain did so for “political, not fishing, reasons”.

Trevor McKee (54), a Kilkeel fisherman, voted to leave, and hopes now for a good deal.

“We have suffered years of management from Brussels, removed from where and how the industry works,” he says. “It was the bureaucrats in Brussels calling the shots and it was the wrong shots they were calling.

“I am hoping [May] takes back sovereignty of our waters. We are only at the starting process. Leaving the EU is all well and good, but we have to leave it with a deal that suits the UK fisherman in retaining rights in its own waters instead of giving it away to other countries.”

SDLP MP Margaret Ritchie, who represents places such as Ardglass and Kilkeel in South Down, voted to stay in the EU, but she is conscious now of the need to get the best deal for Northern Ireland’s fishermen.

“I do not want to see Brexit damage the chances and opportunities of our fishermen or prevent any future infrastructure developments because they gained quite a bit out of the [European] Maritime Fisheries Fund and I want them to be able to fish in the waters they were able to fish in before,” she says.

Ritchie is meeting fishermen in Kilkeel and Ardglass over the coming weeks to discuss their concerns, including their rights or otherwise to fish in southern Irish waters (and vice-versa), and to work out “how it is possible to fight for the best possible special, unique deal for Northern Ireland but also for the fishermen that I represent in the Co Down fishing ports”.

However, Richie is fearful. In time, she says, Wednesday will be seen not as “freedom day” but rather as one that Northern Ireland “will hugely regret”.