Theresa May faces perilous next steps after crushing defeat 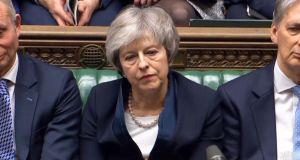 British prime minister Theresa May in the House of Commons on Tuesday. Under a future amendment MPs could attempt to make a no-deal Brexit illegal. Photograph: EPA/Parliamentary handout

Tuesday’s crushing defeat in the House of Commons leaves Theresa May’s Brexit deal hanging by the most delicate of threads with just 10 weeks to go before Britain is due to leave the European Union. Before she considers how to change the minds of 116 MPs to win a majority for a deal, she faces a motion of no confidence in her government on Wednesday.

Jeremy Corbyn’s motion is likely to be defeated, with the hardline Brexiteers in the European Research Group (ERG) promising to back the government and the DUP expected to follow suit. Under the Fixed-term Parliaments Act, if the government is defeated, there is a 14-day period for a government to be formed without calling an election.

If she survives Wednesday’s motion, the prime minister’s focus will turn to the challenge of finding a majority for some form of Brexit. She promised on Tuesday night to engage with “senior parliamentarians” from across the House but Downing Street made clear that May is not preparing to shift from her negotiating red lines.

An amendment approved last week obliges the prime minister to return to the House by next Monday with a motion outlining what she plans to do next about Brexit. Within a week of the motion’s tabling, MPs will debate it and will be able to attach amendments to it.

It would be for the speaker to select the amendments for consideration but they could include alternatives to May’s deal, such as a closer post-Brexit relationship with the EU or a second referendum. MPs could attempt to make a no-deal Brexit illegal.

Conservatives Nick Boles and Nicky Morgan this week published a Bill that would oblige the prime minister to extend or revoke article 50 if MPs could not agree on a Brexit plan. It would give MPs and the government six weeks to find a proposal that could command majority support.

For hardline Brexiteers, leaving the EU without a deal on March 29th is a more attractive option than the prime minister’s deal. But if MPs succeed in ruling out a no-deal Brexit, the alternatives to May’s deal are likely to be softer versions of Brexit.

If the Conservatives and the DUP cannot create a majority for any Brexit plan, an alternative majority that must include opposition MPs, most of whom favour a close relationship with the EU. A cross-party group of MPs is seeking support for the so-called “Norway plus” option which would see Britain remaining in both the single market and the customs union.

Such a proposal could unlock EU flexibility on the backstop, which would not have to become operable in the context of such deep integration.