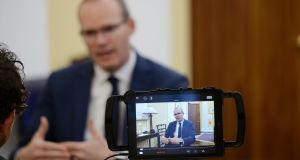 Tánaiste Simon Coveney has said “some serious questions’’ will have to be asked if there is no progress by June on the “backstop’’ in the Brexit treaty guaranteeing no hard border in Ireland.

“I think June is a significant date from an Irish perspective,’’ he said.

A deadline has been set for October for the overall withdrawal treaty covering the UK departure from the EU.

The Minister for Foreign Affairs told the Dáil on Wednesday there was now a focus from the British negotiating team and the EU taskforce on getting a legally operative wording that was true to what was agreed in December.

“If it is not possible by June, is it going to be possible by October ?’’ Mr Coveney added.

He said the draft the EU produced, which he agreed with, was rejected by the British government.

“It is now up to the British government to come forward with their proposals that would have the same outcome,’’ he said.

Mr Coveney was replying to Fianna Fáil Brexit spokesman Stephen Donnelly, who said he was concerned about the delay in reaching agreement.

The longer it went on the more the Border became one of the many legitimate priorities across EU member states, the Dáil heard.

Speaking at a recent European Council meeting of EU leaders in Brussels, Taoiseach Leo Varadkar said he expected the details of the “backstop’’ would be agreed “certainly by October’’.

Mr Varadkar said he would rather have the right deal in October than any deal in June.