‘We don’t have a voice’: NI business people feel left out of Brexit talks

‘Our elected representatives aren’t representing anyone, no matter which side’ 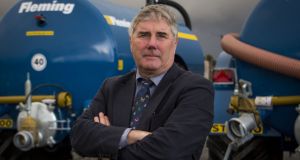 George Fleming: feels nothing has changed since the referendum in June 2016 and he is strongly critical of the North’s politicians.

From his office window in Newbuildings, Co Derry, George Fleming looks out on the Republic of Ireland.

His company, Fleming Agri-Products, was founded in Co Donegal in the 19th century, and came to the North because of difficulties in trading across the Border during the Troubles.

“I started my working life in the Republic of Ireland, in St Johnston,” explains Fleming, “and when we did have a hard border in the past we opened a small factory in Northern Ireland. ”

Today their agricultural machinery is exported as far afield as Australia and New Zealand, and their trailers and land rollers are on their way to Russia to help prepare the pitches for this summer’s Fifa World Cup.

With a year to go until the UK leaves the European Union, Fleming feels nothing has changed since the referendum in June 2016 – “there’s still that level of uncertainty” – and he is strongly critical of the North’s politicians.

“We don’t have a voice,” says Fleming.

“We’ve got one half of our elected representatives who are going and sitting in the House of Commons, and the other half that don’t sit and who snipe round the edges, but there’s nobody actually presenting a united front on what’s best for Northern Ireland.”

A member of the Protestant community who describes himself as “politically neutral”, Fleming voted to remain part of the EU and he fears Northern Ireland is not being properly considered in Brexit talks.

“Our elected representatives aren’t representing anyone, no matter which side of the fence you come from.

“They are in an abyss, they’re living in a wee world of their own and all they’re interested in is poking a green or an orange stick.

“I feel totally let down.”

William Taylor agrees. A beef and sheep farmer from Coleraine, Co Derry, he is also the Northern Ireland co-ordinator of lobby group Farmers for Action.

“It’s not acceptable any longer,” he says.

“Either the politicians need to get back to work or we have another election.

“Northern Ireland has suffered too much without a government, and we have nobody to represent us on Brexit.”

Taylor is clear that, for the farmers he represents, Brexit is secondary on their list of concerns. Their priority is farm gate prices.

“We badly need the government up and running because we want legislation on farm prices brought through Stormont before we leave the EU.

“At the minute there’s a legislative framework there all the way to Brussels which would allow us to do that, but that may not be there after Brexit.”

For Taylor, the deal reached between the UK and the EU in December – which gave the backstop guarantee of “regulatory alignment” – did help alleviate some of the uncertainty.

“That was a big relief to a lot of businesses, to know that at least there was some plan,” he says.

A Conservative and chief executive of Ciga Healthcare, a company based in Ballymena, Co Antrim, which exports medical test kits worldwide, Armstrong campaigned for a Leave vote in the referendum.

“We will leave the EU and there will be a deal done because we [the UK] are the biggest single export destination within the EU of goods from Germany.

“Is Germany really going to put up tariffs against themselves? If they do that, they’re mad.

Armstrong’s assessment is that the common travel area between the UK and the Republic of Ireland will continue, and the Border will be at ports and airports.

What does concern him is the North’s lack of political representation – and the lack of clarity from the British government.

“At the start of March, Teresa May made this great speech, and there was nothing in it she could not have said a year and a half earlier.

“We wasted a year and a half on fiddling around, and that’s not how you do business.”

Time to raise taxes not cut them