British Prime Minister Theresa May said that the UK might ask for a short extension of a planned transition period to ease its exit from the European Union. Video: Parliamentlive.tv 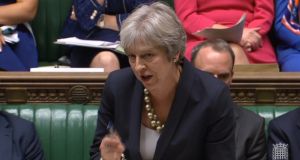 British prime minister Theresa May said an option to extend the post-Brexit transition period beyond December 2020 was one alternative to the backstop. Photograph: PA Wire

Theresa May has called for a UK-wide customs backstop to be made legally binding in the Brexit withdrawal agreement so that it can replace the Northern Ireland-specific backstop proposed by the European Union. The prime minister told MPs on Monday that “in a substantial shift in their position since Salzburg”, the EU was now actively working with Britain on its UK-wide backstop proposal.

EU negotiators say a UK-wide customs arrangement cannot be included in the legally binding withdrawal agreement, so a Northern Ireland-only backstop would still be required in that text.

“We must make the commitment to a temporary UK-EU joint customs territory legally binding, so the Northern Ireland-only proposal is no longer needed. This would not only protect relations North-South, but also, vitally, east-west,” the British prime minister said.

Ms May identified three other steps to resolve the issue, including an option to extend the post-Brexit transition period beyond December 2020 “as an alternative to the backstop”. She said there must be a mechanism to ensure that Britain could not be kept indefinitely within either arrangement against its will and that Northern Ireland’s businesses must continue to have access to the whole of the UK’s internal market.

“Northern Ireland’s businesses rely heavily on trade with their largest market – Great Britain – and we must protect this in any scenario,” she said.

Responding to the prime minister’s remarks, the Irish Government reasserted its position that an extension of the 21-month transition period after the UK leaves the EU next March could not be an alternative to the backstop.

The Government said it would listen to any proposals from the UK but insisted that any proposal had to be “legally operative”, must protect the integrity of the EU single market and customs union, and “has to apply unless and until we have a new relationship that supersedes it”.

Earlier, Ireland’s ambassador to Britain, Adrian O’Neill, told the British-Irish Parliamentary Assembly in London that the backstop had become an issue of trust in the Brexit negotiations and he made clear that it would be necessary even if the transition period was extended.

“Should this require the possibility of extending the 21-month transition period by a further brief time, Ireland would agree to such an extension. However, this would not obviate the need for a legally sound backstop arrangement to be included in the withdrawal agreement,” he said.

Northern Ireland secretary Karen Bradley told the assembly that the British government would not allow a border to be put in place on the island of Ireland “in any situation” and that it stands by its commitment to a backstop.