Police protection given to Skopje deputies who backed pact with Greece 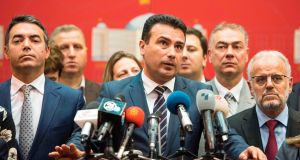 The United States and the European Union have praised Macedonia’s parliament for approving a deal with Athens to change the country’s name, despite a bitter domestic rift over the issue that has prompted deputies to be given police protection.

Matthew Palmer, a US deputy assistant secretary of state, was in Skopje on Monday to reinforce Washington’s backing for a pact that could help Macedonia join Nato and start EU accession talks next year.

After days of debate and tense behind-the-scenes talks, the deal won the required two-thirds parliamentary support late on Friday night, thanks to eight opposition deputies who broke ranks with their party colleagues and voted with the government.

“The United States welcomes the decision by Macedonia’s parliament to initiate the constitutional changes needed to implement the Prespa agreement with Greece, ” said state department spokeswoman Heather Nauert, who called it “a historic opportunity to advance stability, security and prosperity throughout the region”.

“I congratulate all those who decided to walk on along the EU path. I expect that the free choice of all MPs is fully respected, especially of those who crossed the aisle . . . We need statesmanship, not party games,” he added.

In signing the deal beside Lake Prespa in June, Macedonia agreed to change its name to North Macedonia, in return for Greece lifting its veto on the former Yugoslav republic’s ambitions to join the EU and Nato.

Athens has blocked those hopes since Macedonia gained independence in 1991, alleging that the country’s use of the same name as a region of northern Greece implied a territorial claim to the area and the legacy of its ancient ruler, Alexander the Great.

In a referendum in Macedonia last month, 91 per cent of voters backed the deal but turnout was well below the legal threshold.

While the West strongly supports the accord and Macedonia’s swift accession into Nato – which would deny Moscow a potential foothold in the strategic Balkans – Macedonian and Greek nationalists call it a betrayal of their identity and interests.

Macedonia’s right-wing VMRO-DPMNE party swiftly expelled deputies who backed the deal, and traded allegations with the government of prime minister Zoran Zaev over the alleged use of bribery and threats to secure support.

“We assessed the security of deputies, particularly those who voted to start the process of constitutional amendments, and security will be provided to them for as long as it is considered necessary,” Macedonian interior minister Oliver Spasovski said on Monday.

“Those who threaten the security of citizens will be punished,” Macedonia’s MIA news agency quoted him as saying.

Mr Zaev said on Sunday that the government wanted to work with the opposition to prepare the necessary constitutional amendments within 15 days.

They will then be put to another vote in parliament, with only a simple majority required, before a period of debate and a final vote in which a two-thirds majority will again be needed.

If Macedonia fully ratifies the accord, then Greece’s fractious parliament will vote on the deal.

Nikos Kotzias, who signed the agreement for Athens, resigned as foreign minister last week amid tension in the governing coalition, but Greek premier Alexis Tsipras insists the accord will be approved.