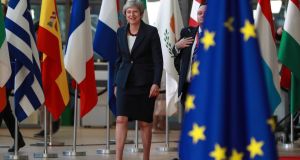 British prime minister Theresa May arrives for the European Council summit in Brussels. There is backing for the idea of extending the UK transition period by a year – although the UK would have to ask for it. Photograph: EPA

There are EU summits which take decisions. They are, after all, the supreme decision-making authority of the union. And there are those consigned to the Sisyphean task of rolling huge boulders endlessly uphill, of trying to maintain some impetus in the movement of the great, but ever-stalling European projects.

That, alas, is the nature of the summit – or summits, I should say, all six of them in different configurations – currently under way in Brussels.

There’s the “tripartite” social summit with the social partners, and the Brexit summit of 27 remainer states yesterday, the European Council summit proper today, the Euro summit at lunchtime with 27 euro members or would-be euro members, and then the Europe-Asia summit tonight and tomorrow with 21 Asian leaders, followed by the EU- Korea summit.

On Brexit, the leaders of the 27 had hoped to be giving formal approval to a Brexit deal which could then go on to be ratified by the European Parliament and the Commons.

Instead, however, over dinner last night they have  heard another state-of-play report from the union’s chief negotiator, Michel Barnier, expressed their confidence in his labours, and told him to continue his good work and to come back when he is ready to summon another summit.

In the unlikely event that British prime minister, Ms May, unveiled a dramatic new, groundbreaking initiative, It may have been discussed, but then referred to Mr Barnier’s team which, alone, can negotiate. But they must be resolute, as council president Donald Tusk urged in his letter of invitation to leaders: “As someone rightly said: ‘It always seems impossible until it’s done.’ Let us not give up.”

There is some sympathy for the idea floated in recent days by Mr Barnier of extending the UK transition period by a year – although the UK would have to ask  for it. But, as Taoiseach Leo Varadkar made clear on his way into the meeting yesterday, it is neither a solution nor substitute for the backstop.

That, Mr Varadkar insisted, would have to remain as a guarantee of no hard border. And in a similar boulder-rolling vein, this morning the leaders of all 28 (summit two) will hear a report from the Austrian  presidency, in the form of its Chancellor Sebastian Kurz, on very limited progress made since June on tackling migration. Notably on three aspects: co-operation with countries of origin and transit, the fight against people smuggling networks and the recent commission proposals on returns, the beefing up of the asylum agency and the European border and coast guards.

What Mr Kurz will not report on is the long-promised reform of the so-called  Dublin regulations, the rules governing responsibility for dealing with asylum seekers where they arrive in Europe. Austria does not approve of burden-sharing and so Mr Kurz has decided it is a matter for the next presidency.

They will also hear a number of reports on strengthening internal security including a response to the latest cyber-attack on the Organisation for the Prohibition of Chemical Weapons in The Hague.

Similarly on the euro, they will hear a report on how prepared the legislation is on strengthening monetary and banking union for its December deadline.

But their lunch is likely to be enlivened by Dutch premier Mark Rutte’s determination to warn Italy about the irresponsibility of its recently published budget targets in breach of EU rule. It could provide the summit with its only good row and light relief.