Tezza and Jezza in the Cor-bin: UK papers rally the vote

Broadcasters may be restricted from reporting on election today, but this didn’t stop the papers giving a final push 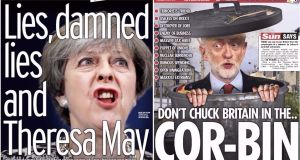 The United Kingdom goes to the polls today and until voting ends at 10pm, broadcasters are restricted from reporting on the election campaign.

But this didn’t stop the newspapers giving a final push for their preferred candidates on today’s front pages.

With a startling Photoshop of Jeremy Corbyn as Oscar the Grouch, The Sun begs voters: “Don’t chuck Britain in the Cor-bin”. The article calls readers to vote for the Conservative party in order to keep “Corbyn and his sinister Marxist gang” out of Number 10, adding that “if Theresa May is re-elected, Britain can breathe a sigh of relief.”

The Mirror has equally strong feelings on the election, criticising prime minister Theresa May for running a campaign “riddled with U-turns, lies and broken promises.” The online version ups the ante with a photoshop of May with Pinocchio's nose. The article goes on to detail the issues they believe May has lied about, including immigration, Brexit, workers’ rights and the NHS.

The Daily Mail is, unsurprisingly, heavily in favour of the Conservative party. They report on Theresa May’s “rallying call last night to ‘reignite the British spirit’.” The tone of the lead article is very confident that May will be returned to office, but just in case they have a detailed guide on how to vote tactically in key constituencies.

The Star opted for a comparison of the Theresa May and Jeremy Corbyn, rather than supporting one or the other. May impresses the paper with miles travelled in the last of the campaign (567 miles compared to Corbyn’s mere 526) but the Labour leader won on the number of rallies, managing six in one day. The readers are left to make up their own minds on who to vote for.

Another unsurprising push for Thersa May, who writes to Telegraph readers today that “’in the privacy of the polling booth’ that they must choose a leader with ‘the ability to knuckle down and get the job done’ on Brexit.”

The prime minister slams Jeremy Corbyn, writing that “rarely can a candidate for high office have been so singularly ill-equipped for the task.”

Although The Guardian has officially backed Labour, their final front page takes a neutral approach and reports on the final day of campaigning. With the polls varying wildly, all parties seem fairly optimistic.

The Times is the only one not to lead with the election, focusing instead on footage of the London Bridge attackers “laughing, joking and hugging as they plotted their murderous rampage”. In a smaller story they report on the latest election polls, which show a late rise in support for the Conservative party.