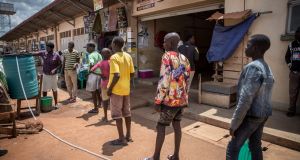 Street children queue to wash their hands outside Gulu main market before being given a meal. Photograph: Sally Hayden.

In the early weeks of the coronavirus lockdown, Okot Ronald Sande, a smiley 17 year old, was picking his way through the darkness to the alleyway he sleeps in, when he says he was set upon by the police.

His father is dead and mother is missing, and Sande has lived on the streets of northern Uganda’s Gulu city since he was 10. He has begged for money or done odd jobs to get by, but the coronavirus pandemic has reduced opportunities. “If anyone gets money, we fight among ourselves now,” he said, explaining how his relationships with other street children quickly deteriorated.

Prohibitions on gatherings, a 7pm nationwide curfew and the brutality of security forces mean Gulu’s streets are no longer safe. At least seven people have been killed by law enforcement officials across Uganda since Covid-19-related restrictions began.

Sande displayed scars on his arm and a bald patch on his scalp – injuries he said came from being hit with fists and a metal wire. The attack hurt, but he had no way to prevent it, he said. How can he go indoors when he has no home?

Northern Uganda has a long history of minors being separated from their parents. The Lord’s Resistance Army insurgent group kidnapped tens of thousands of children over two decades until the mid-2000s, forcing them to become fighters. Many disappeared, and some of those who returned home never found their families again.

In Gulu, hundreds of children still live on the streets. Though they may not remember the war, they feel the effects of it. Some girls are involved in prostitution, while boys have a reputation for thievery and crime. Locals have long muttered about the need to get them into shelters or back to their families, but the pandemic has made their struggle impossible to ignore.

In countries across the world, unprecedented lockdowns have forced a reckoning about how society’s most vulnerable people are living – tens of millions of street children among them.

“It has brought into really immediate relief all of the issues street children face: a lack of access to services, lack of safety, lack of sense of belonging in their communities,” says Duncan Ross, the chief executive of Street Invest, a UK-based organisation which has partners in 20 countries. “If you’re a street child and Covid is coming, you can’t get out of the way.”

In Gulu, local authorities set up a committee to debate the issue. Under a mango tree, 14 people gathered on afternoons throughout April and May, making suggestions about what could be done or listing offers to help.

One idea was daily meals. Between the city’s main market and the shuttered Holy Rosary Catholic Church, dozens of young people began to gather at lunchtime.

Two sisters, aged 15 and 11, explained they had attended boarding school until money ran out. After the aunt they were staying with got a boyfriend, she ordered them to leave. “I want to go back to school,” the younger girl said.

“I was having the problem of [having no] food at home. I have a mother but she said I got involved in a bad group and kicked me out,” said another child. “Now I beg [for] money. Sometimes I work hand-to-mouth. The boys will find us and ask for money and slap us if they don’t give it. We don’t have a basin for washing or soap.”

“The corona has made so many problems, even if you ask no one can help,” added a 15-year-old girl, who wanted to move into a shelter.

Joshua, a boy of about eight, said people on the street throw stones at him. “Will you take me home? I want to go in a vehicle,” he pleaded.

“I’m not sure if the children are really concerned about the virus or not. I think their main goal right now is eating, having a warm place to sleep,” says Nancy Lee Cardoza, an American who funds meals through her charity, the Northern Uganda Women and Children Support Initiative.

Hashtag Gulu, a Ugandan-run organisation that started as an informal effort among friends a few years ago, has gone one step further.

On April 20th, it organised for nearly 50 children to move into a spacious compound previously used to house young people who escaped rebel fighters.

“Life is hard for everyone, but for a street kid who depends on the street for eating and survival, you can imagine,” says Ojok Michael, Hashtag Gulu’s project co-ordinator. “It’s an opportunity for them to reflect on their life, but also for us to reach out to show care.”

Previously raised funding covered costs including bedding, medical care, food and fencing for the facility (local authorities would not grant them permission to house street children without it). Michael says there have been teething problems: many street children have drug or alcohol dependencies. One boy was traced to the facility by a mother who thought he was dead, yet he refused to go home with her without a guarantee he could go to school.

Local musicians and athletes come in to lead activities with the children. They’ve been doing sports drills, arts and crafts, football games and dancing classes.

When the lockdown ends, Hashtag Gulu’s volunteers plan to run training programmes. They’ve had some interest though, realistically, staff expect many children will disappear again. “I think [some] are just here for a safe space during this time,” Michael said.